Kyrie Irving incensed over last-second play in loss to Orlando


The Celtics had earlier opportunities to put this one away against Orlando, but it came down to the final seconds with the score 105-103 in favor of the Magic. With just under three seconds remaining in the game, Gordon Hayward inbounded the ball to Jayson Tatum whose contested corner fadeaway missed. Game over. 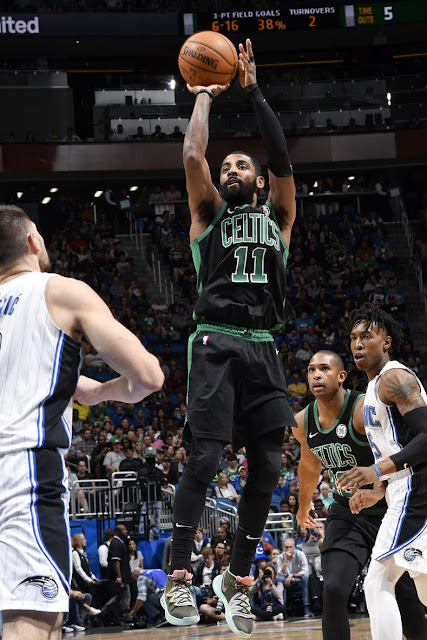 Hindsight is damn easy, and after Tatum's missed shot, Kyrie Irving confronted Gordon Hayward over Gordon's decision on the inbounds play. It seems that Kyrie wanted the pass to go to Al Horford for a subsequent hand-off to Irving for a 3-pointer or drive.

Understand, based on Kyrie Irving’s reaction, this wasn’t what was supposed to happen, but don’t like the body language from a team leader. #Celtics pic.twitter.com/zPPZqd1u0V

Kyrie's post-game interview gave us more. "Experience - we're lacking it" is what he had to say. Had Jayson's shot gone in, the game would have gone to overtime, and everyone may be feeling better this morning. But I have to go with Kyrie on this one. The synergy between Al and Irving is terrific. And they are true veterans. Three seconds is sufficient. But Irving should have been a bit less demonstrative after the play. Celtics fans are seeing first-hand some unrest among the guys in green.

Kyrie Irving with a long, thoughtful answer explaining that team, especially younger players, needs to worker harder and more consistently in order for this team to be great. Said he’s not content to be 5th seed and wants team to fight for better seeding.

"It's not easy to be great" is another tidbit from Irving after the game. In my 1-on-1 pre-season interview with Brian Scalabrine, Scal said that the Jay-Team, Jayson Tatum and Jaylen Brown, "have great heads on their shoulders - not good, great." Was he right? Is some adjustment needed? Look for my article later this morning.