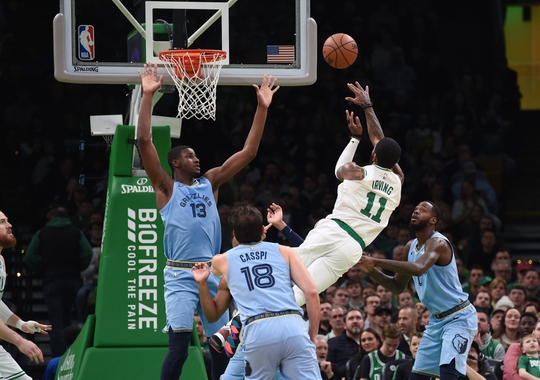 The Celtics fought past the Grizzlies on Friday night, 122-116. Boston was carried by the backcourt tandem of Kyrie Irving (38 pts, 11 ast, 7 reb) and Marcus Smart (20 pts, 6 reb, 3 ast, 6-for-8 3PT). The C's relied on a strong performance from their bench and extended their home winning streak to 8 games.

The Celtics opened the game neck-and-neck with the Grizzlies, building only a 5-point lead over Memphis courtesy of two Smart treys. That quickly disappeared as a Grizzly 11-0 run gave Memphis a 22-16 lead. That's when the Celtics' second unit checked in and dominated the rest of the first quarter.

Two straight games now where Boston's second unit has been excellent during the latter half of the first quarter. Brown/Baynes/Rozier all +17 in 3:15 of PT.

The second quarter wasn't nearly as kind to the Celtics, though, who started turning the ball over to the tune of 9 points off turnovers for the Griz, allowing them to claw their way back into the game. The double digit lead shrank to just three points with three minutes left in the first half. Two minutes later, Memphis took their first lead since the first quarter with a Justin Holiday corner three. Next possession, they padded that lead to four with another three-ball from the other side by Holiday.

The C's came out of the locker room swinging, rapidly firing off 7 points in the first 1:12 of the second half to take a three point lead.

After a Grizzlies timeout, Memphis sank back-to-back long balls to retake the lead, but Al Horford answered on the other end to tie it again.

Fittingly enough, the three was the center of the third quarter as each team fired off one after another. Smart continued to scorch from deep, keeping the C's in the game with his two threes in the quarter:

Louder for the people in the back.

Once Smart got started, Kyrie took it from there. In the final six minutes of the third, Uncle Drew notched 12 points, picking up an astounding 20 points in the third frame alone. In spite of that, the Celtics took only a 96-91 lead into the 4th quarter.

Kyrie put the cherry on top of his 20-point third quarter (!!!) with this bucket 💪💪💪https://t.co/Bgd4V3Netg pic.twitter.com/0tgsOhaeN1

The final quarter saw the C's and Griz trading punches back and forth. Boston couldn't pull away, with their largest lead of six coming in the opening seconds of the quarter. Memphis scrapped to within two points with only 4.5 minutes to go in the game. Cue: Kyrie Irving.

Out of a Celtics timeout, Kyrie showed off his dribble moves on back-to-back possessions, giving himself enough room to hit consecutive mid-range jumpers, building the lead back to six.

Kyrie then drilled home the dagger three with 1:22 to go to make it an 8-point game, effectively putting it out of reach for the Griz.