The Boston Celtics held on to beat the Brooklyn Nets 112-104 in their third Monday night matchup in January. The Nets were feisty for most of the game, but Boston got contributions up and down the roster and were able to pull away late. 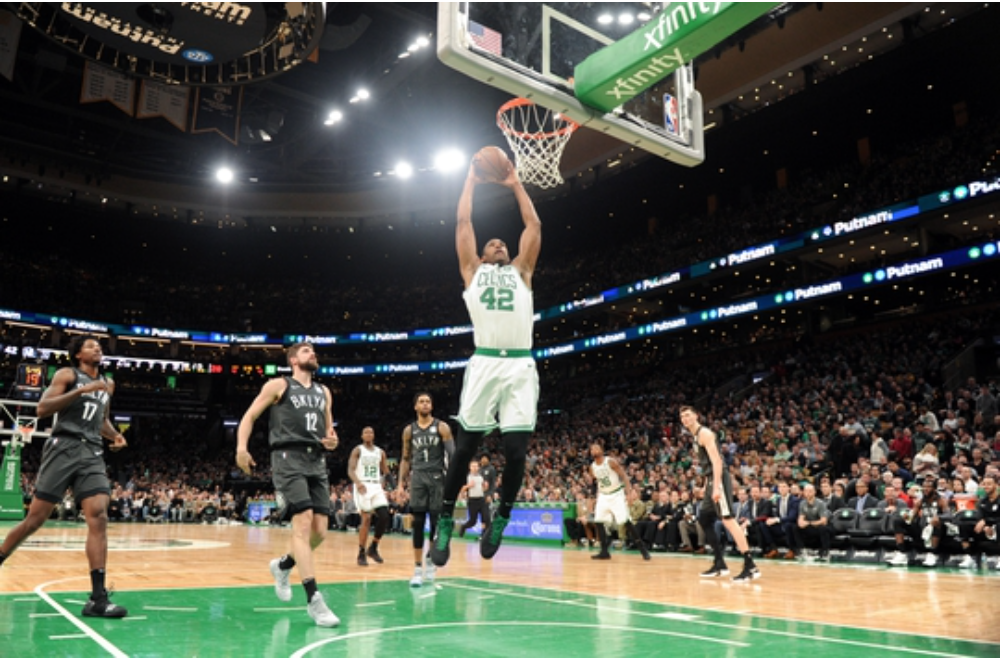 Coming off the back of the thrilling yet frustrating loss to the Golden State Warriors on Saturday night, the Celtics took a few minutes to get back into the groove they were playing with over the weekend. Two sloppy turnovers were the result of Boston's first two possessions, but then things started to get going. After neither team scored for the first two minutes of the game, Boston hit their next three three pointers in route to an early 11-2 lead.

Al Horford and Marcus Smart led the charge as the C's got things rolling through the middle of the first quarter. Horford was all over the place, coming up with three offensive rebounds and a few big blocks along the way. Smart, known three-point marksman, scored 11 first quarter points and knocked down a trio of threes. With Kyrie Irving (left hip strain) missing the game, Boston was in need of a spark on the offensive end, and the Smart/Horford duo did the job.

Marcus Smart with 11 points in seven minutes and he had a few words for the Nets bench on his way back down the floor.

After going up 23-10 halfway through the first quarter, the Nets surged back into the game with a 10-0 run in just over two minutes of play. Brooklyn got off to a rough start, missing eight of their first 10 shots, but this team has made a name for themselves as a tough, never-say-die team that will always fight hard, even if they are outgunned. Brad Stevens called a timeout to stem the tide, and inserted Aron Baynes into the lineup. Baynes immediately rewarded Stevens for the decision, and scored the team's next seven points to extend the lead and give the C's some breathing room.

Boston added to the lead to start the second quarter and got the lead up to as high as nine early. But the combination of Shabazz Napier, a Massachusetts native, and DeMarre Carroll off the Brooklyn bench closed the gap once again. The Nets cut the lead down to just two with eight minutes left to play, and if there is one thing we learned from this game, it's that you will never get an easy win against Brooklyn.

The Celtics, and Horford specifically, were dominant protecting the rim. Horford had five first half blocks and the team racked up 11. Brooklyn still finished the half with 50 points, but Boston was making it difficult for them around the basket.

Weird things about this game:
-The Celtics had 8 turnovers in the second quarter but held the Nets to 28.1 percent shooting.
-The Celtics have blocked 12 shots.
-Aron Baynes has taken the most shots (10) on his team.
-Gordon Hayward and Marcus Smart both got 2 stitches

A 21-8 Nets run, what has become a hallmark of these "Brooklyn Nets Mondays," opened the third quarter. The Celtics turned to ball over too often, and D'Angelo Russell scored 14 points in the first six minutes of the third quarter. After Brooklyn took a three point lead, their first of the game, Horford decided to go into "Playoff Al" mode and scored six straight points to put Boston back on top. Without Kyrie, and the Nets trotting out a 2-3 zone for most of the game, the C's had a heavy diet of post-ups for Horford and Baynes. Whether an easy look against a smaller defender or a pass generated from cutting behind the post-up, the Celtics found some success by running the offense through the bigs.

After Boston had crashed the glass hard in the first half, the Brooklyn bigs started to throw their weight around in the second half. By the end of the third quarter, the Nets had gotten 29 second-chance points off of 16 offensive rebounds. The Nets outscored the Celtics 38-29 in the third quarter and went into the final quarter down by just one point.

Boston got back to their workman ways to start the fourth and opened up a 12-point lead on the back of an 13-2 run. Jaylen Brown and Baynes combined for 35 points with just over seven minutes to go in the game, and contributed to a number of second chance points and effort plays. Brooklyn helped out the C's cause by forgetting how to not turnover the ball, as well.

The Nets are 1 for 4 with six turnovers over the first 4:48 of the fourth quarter. Monster defense during this stretch.

Brooklyn shot terribly from the field, but their offensive boards and second chance points kept them in the game. Once Boston started cleaning up the glass and pressuring them on defense, Boston was able to open up their lead and get some separation, something they couldn't do in the third quarter.

The Celtics stretched the lead to double digits after the Nets scored just 16 points in the fourth quarter. It was a hard-fought victory, and one that the team needed after losing a thriller on the weekend.