Winning streak ends as Celtics lose in the Motor City, 113-104 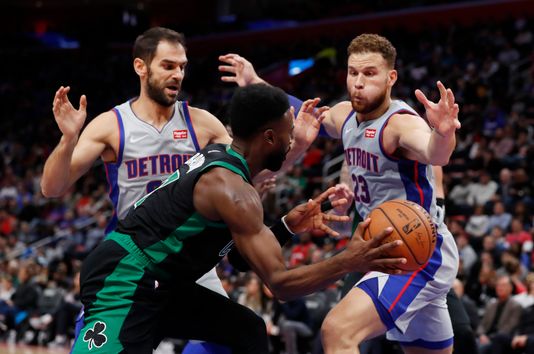 Coming off a dominant performance at home against the bottom-feeding Hawks, the Boston Celtics traveled to Motor City to battle the Detroit Pistons.

The Celtics started the season slow, while the Pistons were firing on all cylinders. However, the tables had turned as of late, as the Celtics came into Detroit riding a 8-game winning streak (with a team record +182 over those 8 games), while the Pistons had dropped 6 in a row.

Boston would once again see themselves without Al Horford, who was out resting a sore knee. Aron Baynes was still on a minutes restriction, so Daniel Theis and rookie Rob "I Apparently Need a New Nickname" Williams would have to deal with Andre Drummond, a big who seems like a walking 20/20 man against Boston.

The first quarter was truly nothing more than a massive seesaw battle, with both teams executing offensively. Defensively? Not so much, as both teams mirrored their offensive outputs, shooting 13/21 (62%) from the field. After 1, the differential was the same as during warmups.

The 2nd quarter picked up where the 1st ended, with the Cs and Pistons trading buckets. The Pistons held on to a 6-point lead for a decent portion of the frame, however, thanks to Langston Galloway's 10 points on 4/6 from the field.

After Andre Drummond hit a free throw to put the Pistons up 57-50 with 1:55 left in the half, the Celtics charged back, thanks to a few Kyrie-being-Kyrie plays.

Got the steal and the points! pic.twitter.com/sbYANNDeoY
— Boston Celtics (@celtics) December 16, 2018

Kyrie gave us a scare as he grabbed his right leg after this play, but he didn't miss any action. Bullet dodged.

Starting the 3rd, the Celtics went on a 6-0 run, but the Pistons quickly countered with an 11-0 run of their own, taking their biggest lead of the game (74-66) with 6:17 remaining in the frame. A complete lack of energy on Boston's part, combined with cold shooting, careless turnovers, and defensive brain-farts allowed the Pistons to extend their lead to 14 with a couple minutes to go. Thankfully, Marcus Smart stopped the bleeding, answering with back-to-back triples of his own to end the 3rd.

The 4th quarter picked up with more lackadaisical play by the Celtics, who allowed a 9-1 Detroit run to give the Pistons a 94-79 with 9:42 to go.

GAME NOTE: Boston looking tonight like the struggling Cs we saw at the beginning of the year. Not hitting shots. Lack of movement and energy on both ends of the floor. Even our go-to guys this year, Kyrie and Marcus Morris, were struggling from the field, combining for 12/29 FG.

What happened in the 4th quarter, you ask? Well, commentators Brian Scalabrine and Mike Gorman hit as many shots as the Cs did for the better part of the period, with the Celtics connecting on their first field goal of the 4th quarter with 4:20 to go, another Smart 3-ball, to cut the Pistons lead to 97-88.

After the brief intermission, the Pistons executed, answering the Celtics brief comeback with a 5-0 run of their own.

With 2:35 to go, Celtics coach Brad Stevens went to the Hack-a-Drummond, despite him being 4/5 from the line in the game. Drummond responded by splitting the pair, giving the Pistons a 105-92 lead.

The game's exclamation mark came with about a minute and a half, when Jayson Tatum's attempt to tear the rim down was met with a Drummond rejection instead. Good night.

Tonight wasn't our night as the Pistons' non-stop energy and overall better execution proved to be too much for what appeared to be a fatigued Celtics team.

GAME NOTES:
For some reason, Boston was just a step slow tonight. Passes weren't crisp. Shot selection was shaky. Shot-making was even worse, as the Celtics initial 62% shooting barrage in the 1st quarter dropped to 41.5% for the entire game, including a horrendous 27% from downtown (9/33).

The Celtics hit all 25 of their free throw attempts against the Wizards earlier in the week, but managed to make only 17 out of 23 tonight. The Pistons were 25-35.

Tonight was just a weird game. If you looked at the entire box score (without looking at the final score), one would assume this game was a one or two point game.

Oh well, you can't win 'em all. We'll just have to start another 8-game winning streak starting on Wednesday when we host the Phoenix Suns at TD Garden.