It had to happen, but it took much less time than I had thought. I posted the article at 4:00 AM ET yesterday (December 14), and by 11:30 AM the Timex watch company had reached out to the Time Lord, Rob Williams, via Twitter. "And if some clock or watch manufacturer doesn't hit Williams up soon, they may regret it when stardom hits" is what I wrote, and it was a no-brainer. 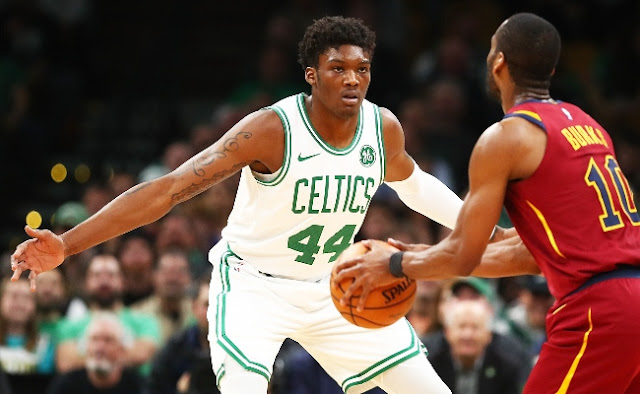 The Time Lord played 16 minutes last night in the win over the Hawks and notched five rebounds and five blocks. Rob is quickly getting the attention of the League.

ROB WILLIAMS GOES EYE-LEVEL WITH THE RIM FOR THE ALLEY-OOP SLAM
(This came only 5 seconds after checking in for the first time tonight.) pic.twitter.com/9GnTEZZ7yB

The discussion about Williams this morning on NBA TV concerned just how good Rob would be when he learns "to defend in space", giving his team the ability to pick up the pace. And his rookie exuberance needs to be contained slightly to keep those blocks in bounds and in play.

AND ANOTHER ONE!!! #TIMELORD pic.twitter.com/0kU0XJc5Lh

I commend Timex for seeing this opportunity and seizing it. A year ago, Danny Ainge scouted both DeAndre Ayton and Rob, and obviously liked what he saw in Williams (per CelticsWire.USAToday's Jared Weiss):

On the other end is Williams, a Blake Griffin prototype who can jump out of the gym as much as Ayton, but is more nimble at 6’9″. He has a 7’5.5″ wingspan and moves with great balance and agility in the post. It remains to be seen how much he can grow his game out of the paint, but he’s shown the passing potential and unstoppable scoring chops to be a lock for the top-10, if not top-7 in this year’s draft.

Top-7 or top-10? And we got him at #27! From my article about the uses and abuses of the Time Lord moniker, I obviously see the Timex/Time Lord link as a terrific use. I hope this partnership comes to fruition, but it would certainly mean the nickname needs to stick. I admit to being concerned about Rob's early tardiness and forgetfulness, and also some doubt about the Time Lord nickname. Not a problem with either one nowadays. Things are working out nicely for this fine young man.