The Time Lord & hang-time, dunks, blocks & rebounds - how time is on his side


I promised (or threatened) my readers that I would be using and abusing Rob Williams Time Lord moniker. So here we go. I am always curious. Beyond height, length, leaping ability and athleticism, how does time affect a player's blocks, dunks and rebounds? 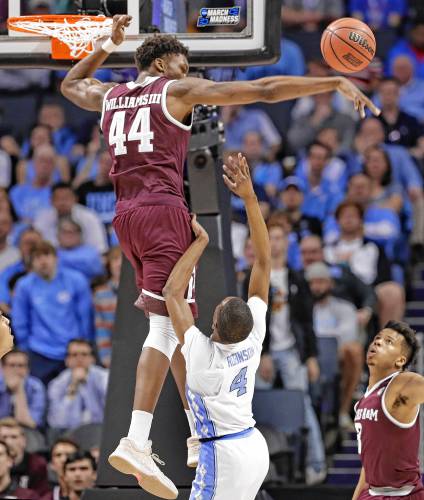 When a basketball player leaps for a block, rebound or dunk, he spends well-over half of his air time at the top-half of the leap - 71% of the time, to be exact (per wired.com's Aatish Bhatia):

WHENEVER YOU JUMP, YOU SPEND 71 PERCENT OF YOUR TIME IN THE TOP HALF OF THE JUMP. THIS HELPS CREATE THE FLOATING ILLUSION OF HANGTIME.
You might expect that when you jump, you spend equal amounts of time in the top and the bottom half of your jump.

But if you think about it, you're moving fastest the moment you leave the ground. Every instant after liftoff, you slow down, until you reach zero vertical speed for a brief instant at the peak of your jump. After that, your speed increases again in the downwards direction, as you fall back down. This means that the top half of your jump (in terms of height) is also the slower half, and so it takes more time to cover that half.

I did the math/physics exercise on my own, and it is correct. Rob Williams would spend 71% of his time (hang-time) at the top-half of his jump. giving him plenty of time to dodge his defender's hand for a jam, determine the flight of the ball for a block or predict the path of a missed shot for a rebound.

We are talking very-real physics here. Now on the theoretical side, time would pass quicker at the peak of his jump due to the fact that time slows when a person gets closer to a gravitational body (the Earth, in this case), and quickens as the person moves away. The difference is infinitesimally-tiny. Not of much use for a basketball player, but immensely valuable for a Timex advertisement.

Picture this. It is the beginning of the third quarter - Celtics trailing - Rob on the bench - puts his Timex on - and we are immediately transported ahead in time to the fourth quarter where Williams is leading his team to victory - kind of a future-play, as opposed to a replay. Just trying to help out, Rob.

And if you have a little more time, I give you the following: