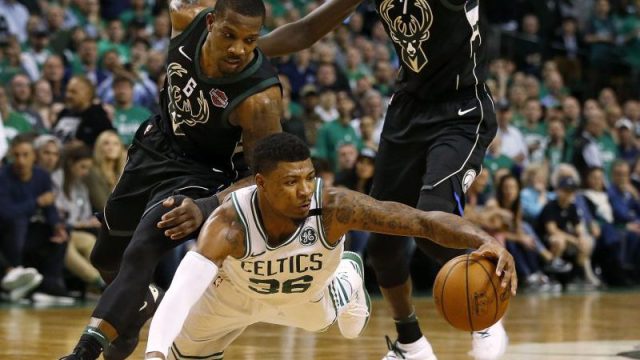 After dropping their last two games to the Detroit Pistons and (ughhhh) the Phoenix Suns, the Boston Celtics faced off against their former playoff foes, the Milwaukee Bucks, in Boston on Friday night.

The game started off as promising as possible, with the Celtics jumping out to a 10-1 lead. And then Bucks coach Mike Budenholzer called a timeout. That was pretty much the game right there, as the Bucks came out of that brief break firing on all cylinders, countering the Celtics 10-1 run with a 16-0 burst of their own. When it was all said and done, Milwaukee outscored Boston 34-12 to end the 1st quarter.

After what was a promising start, the Celtics stumbled, often looking lackaisadacal on defense. When they weren't missing layups or open three-ball attempts, they were turning the ball over. Meanwhile, Milwaukee saw Thon Maker and Tony Snell transform into Steph Curry-esque snipers, knocking down 8/11 shots combined.

Boston attempted to play catchup for the remainder of the game. And while Jaylen Brown had a breakout game with 21 points, he missed 5 free throws along with two critical layups that would've cut the Bucks once 26-point lead to single digits. Adding insult to injury, the Bucks sprinkled salt onto Boston's deficit wounds by countering Brown's misses by converting a three ball and a layup of their own, turning what would've been a 7-point deficit back to 14.

It's safe to say the Celtics missed key components of their personnel tonight. We needed Horford's leadership and size to help slow Giannis, and help clean up the glass. Instead, Boston lost the rebound battle -- badly, mind you -- 55-36. We missed Baynes in there, bodying up Giannis and company with his big frame, as well as helping on the glass. And let's not forget what Marcus Morris brings to the table, with his intensity, competitive edge, and scoring ability.

All those injuries + Gordon Hayward and Kyrie Irving combining for just 10/33 from the field, along with Rozier being a no-show (just 1/7 from the field for 4 points and a -22) all added up to a potential win that wasn't to be.

Last night, the Celtics lost more than just the game, but also the chance to secure a potential playoff tiebreaker, as the Celtics/Bucks only play three times this year and Boston had won their first matchup earlier in November.

Hopefully, Mook Morris and Big Al will be back soon to fortify the paint. And hopefully we can regain our composure and right the ship, because they'll have to face the Hornets, 76ers, and Rockets in their next few games.


GAME NOTE:
The Celtics had won their previous six matchups vs. Milwaukee.