Marcus Smart is now tied with his boss, Danny Ainge, for most 3-pointers (348) made by a Celtics player. Danny could be a gunner at times, and so can Smart. The difference comes in the accuracy. Guess who wins that one? But we can see Ainge still remains playful as he tweeted a joke about trading Marcus. 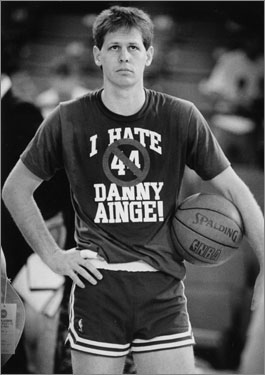 Marcus can not be traded at least until December 15th, and that may extend to January 15, 2019 due to certain circumstances of Smart's contract. Suggesting moving that date up to today was obviously some fun between boss and employee.

Ainge's career shooting percentages are quite good. He shot 47% on field goals, 38% on treys and 85% from the foul line. Smart? Not so good. Career-wise, he is 36% on field goals, 30% on threes and 76% from the charity stripe. Speaking of careers, here is Danny's career game with 45 points, including his flippant comment on his ball-hog teammates.

Coulda had more of these nights had Bird and McHale not hogged it so much😂I prefer the 🏆🏆🏆☘️☘️☘️ https://t.co/cZqepupWwO

Danny used to joke about his buddy, Kevin McHale, being the "Black Hole" on offense - once the ball went into Kevin anywhere close to the hoop, it never came out again. Larry Bird? Let's face it - everything went through Larry. The ball was in his hands a lot.

I absolutely never, ever envisioned Ainge in his playing days in Boston becoming one of the great front-office minds in the business. Please take my twitter poll on that issue, or give me your thoughts via comment.

If you followed Danny Ainge during his playing days in Boston, did you envision him at the time becoming one of the great front-office minds in the NBA.