Celtics starting to find their groove on offense


When Marcus Smart hits 5-of-7 from the field and 2-of-4 on threes, we know something is going right with the Celtics offense. That is what he did last night against the Cavaliers. And his back-court mate, Kyrie Irving torched the Cavaliers for 29 points, hitting 75% of his shots from the field and 71% on treys. For the two games Smart has started, the team's offense is clicking. 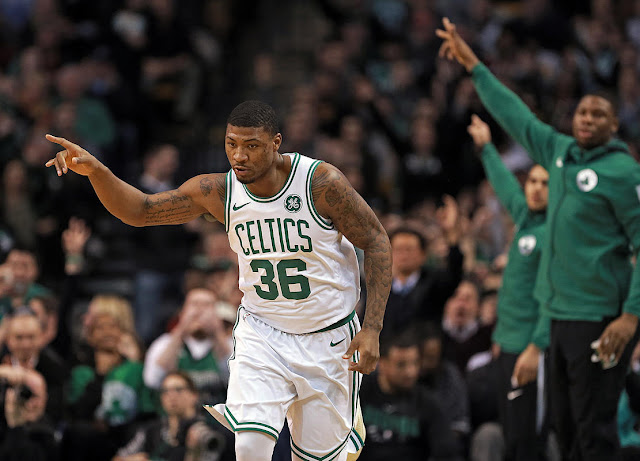 As the tweet indicates, Boston was rated 27th in Offensive Rating for the first six weeks, and tops the list for the two games played this week. The team's Net Rating for the week is a solid 25.0 and also tops the NBA rankings. Quite an abrupt turnabout, although a small sample.

For the first six weeks of the season, Boston shot 43.7% from the field and 34.3% on threes, ranking them 28th and 20th respectively. This week they are ranked second in field goal percentage (51.3%) and first in 3-point percentage (51.4%). In addition, the Celtics won the assist battle versus the Cavs, with Boston racking up 30 to Cleveland's 18, a good sign that this crew is starting to find each other in the right spots at the right time. Hopefully, it will continue.