Celtics lack of effort and rebounding led to loss versus Suns


Rebounding is mostly effort and dedication to the task at hand. The Celtics demoralizing loss to the Suns, coupled with Phoenix also winning the rebounding battle, 56-37, shows a lack of both, at least for this one game. For the season, Boston is ranked 10th in the NBA in rebounding at 45.8 rebounds per game, while Phoenix ranks 27th at 41.0 per game. 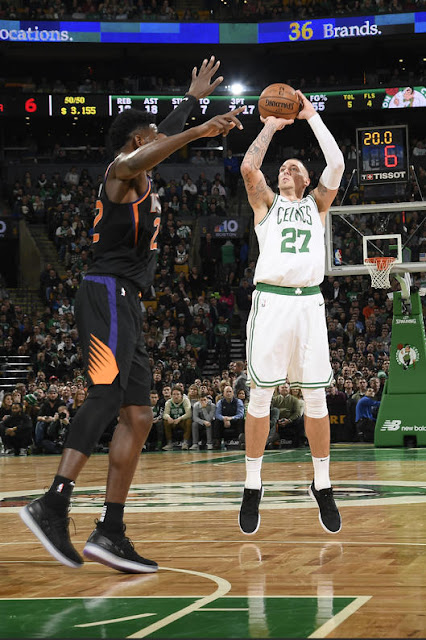 Jayson Tatum and Rob Williams led the team in rebounds with eight apiece. Kyrie Irving and Gordon Hayward had five each, while Marcus Smart had four. Terry Rozier, Semi Ojeleye and Jaylen Brown each had only one board - in a combined 58 minutes of floor time. Aron Baynes gathered in one rebound in only two minutes prior to his injury, while adding four points on 2-of-2 shooting.

The Celtics clearly needed Aron to contain Deandre Ayton who finished the game with 23 points (71% from the field) and 18 boards. Terry, Semi and Jaylen only collecting three rebounds in 58 minutes is unacceptable. A team can collectively fail to hit their shots consistently for a time. It happened early in the season. But Boston's rebounding margin for the season is close to plus-5, not the minus-19 that happened last night. That should never happen. What we saw was a lack of effort - plain and simple. Missing Baynes for most of the game, and Al Horford and Marcus Morris for all of it contributed to the game-loss and rebounding flop. But it's no excuse.