Besides Danny Ainge being attached at the hip to Marcus Smart, Danny just loves that type of player. The every-rebound-and-loose-ball-is-mine attitude. Marcus Morris has some of that in him, too, and that is why the Marci are in the starting unit, and the Celtics have gone on a run. 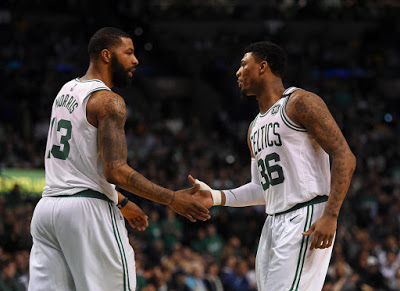 Smart and Morris were part of the Bench With Attitude in the early going of a less-than-expected season. When their attitude was transferred to the starting unit, things turned around in a positive way very quickly.

In a contract year, Morris is showing not only that he belongs, but that he could be vital in Boston's run to a Title. In the last nine games, he is averaging 29 MPG, 17.7 PPG, 5.8 RPG and 2.0 APG while shooting 51% from the field, 41% from the 3-point arc, and 92 % from the free throw line. Smart simply can not be defined. But in the right line-up where his shooting woes can be tolerated, he can win games (per The Crossover's Rob Mahoney):

The Celtics finally unlock the killer rotation they've searched for all year, moving Jaylen Brown and Gordon Hayward to the bench and affording both players the room they need to work out the kinks.

Boston has its killer starting lineup—just not quite the one it envisioned. Stevens replaced Hayward with Marcus Morris, a beefier wing with a simpler game, and Brown with Marcus Smart, a guard who approaches every 50-50 ball with life-or-death gravity. It’s a less talented starting five than the Celtics had hoped, yet within it those talents stretch further. What was the 27th-ranked offense before the change has been the best in the league since—separated by an incredible 16 points per 100 possessions, according to according to NBA.com.

Is Marcus Morris more skilled than Gordon Hayward? I think not. How about Marcus Smart having better skills than Jaylen Brown? It is at least debatable. But the Celtics are winning. No debate there (per Rob Mahoney):

It isn’t enough to be skillful. For Boston to make good on the promise of this roster, it has to play in a way that actively challenges opponents—a more confrontational style than lilting mid-range jumpers allow. Fortunately for the Celtics, confrontation may be what Morris and Smart do best.

The Celtics MUST find a way to keep Marcus Smart. That’s all there is to it. (Maybe let him moonlight as a Patriots strong safety/LB?)
— Bob Ryan (@GlobeBobRyan) May 16, 2018

The Celtics take on the Suns tonight, and expect the same starting-5. Stevens, in changing the line-up, wanted the attitude and confrontational style right out of the gate. It has worked nicely.