Win or lose, the Celtics just look awkward out there. Everything seems skewed. The team's two best veterans, Kyrie Irving and Gordon Hayward came out of the gate struggling, while back-up Marcus Morris has looked his best since joining the team. Al Horford seems lost at times, and Jayson Tatum wasn't hitting his shots for a spell there. Neither has Marcus Smart, but we knew that coming in. The main point here is that fans are split on their views of Hayward. 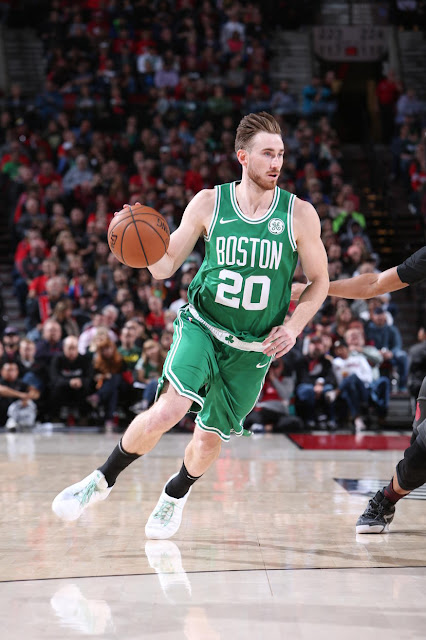 Should he start or come off the bench? Should his minutes still be limited, or should they increase? Brad Stevens has Gordon in the starting unit for a reason. Hayward may be the most versatile player on the team. His last season in Utah, he averaged 34.5 MPG, 21.9 PPG, 5.4 RPG, 3.5 APG and 1.0 SPG while hitting his shots at a 47% clip (40% on treys).

In the Celtics last game versus Portland, he was on the floor for 31 minutes and only scored seven points (3-of-7 on field goals, 1-of-3 on 3-pointers), but managed to grab nine boards and hand out five assists with only one turnover.

#Celtics Gordon Hayward said he hopes minute restriction is being lifted, said he thinks him playing odd chunks of time to stay at 25 is affecting teammates & how they play with him.

I agree here. He is the new guy. The rest of the team played together most of last season and well into the playoffs. And Hayward playing "odd chunks of time" could very well be making the team's play on the court even more awkward.

It may possibly be advantageous to have Gordon come off the bench for a while, but his minutes on most nights need to be in the low 30's. Any minutes restriction needs to be lifted, The team is home for three straight games, and the time is right. Gordon needs to find his groove with his new teammates, and now is the time to get into it. The team needs fluidity. That is Gordon's game.

Photo via NBAE via Getty Images