Semi Ojeleye gets first start of the season vs. Bucks - comes through on both ends


Brad Stevens inserted Semi Ojeleye into the starting unit mainly for coverage on the seemingly-unstoppable Giannis Antetokounmpo. It wasn't the best of starts for Semi. He picked up two fouls and missed a 3-pointer in the first five minutes of the game, but things started going his way after that. 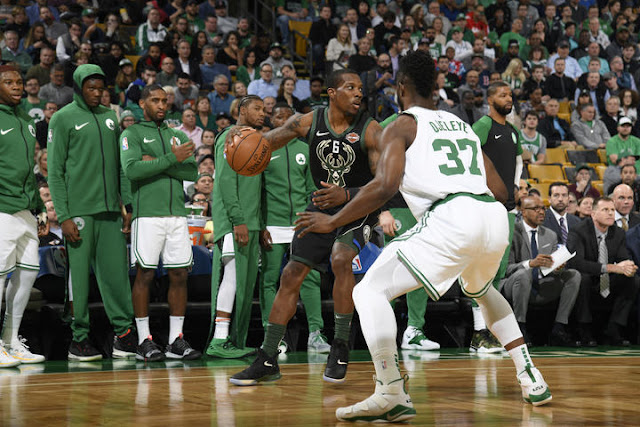 He quickly picked up a steal and then went to the floor for a loose ball, resulting in a jump ball - Celtics possession. A rebound and then a nice feed from Jayson Tatum ended in a nifty 3-pointer for Semi, and he was off and running.

Stevens clearly appreciates the job Semi does on Giannis. https://t.co/qX86yfSySk

Ojeleye was on the floor for 22 minutes in this one, scoring 10 points on 4-of-6 from the field and 2-of-4 on treys. He added five rebounds and two steals.

Bucks’ offensive rating with Giannis on the court vs. Boston last season when Semi Ojeleye was on the bench: 102.9.

Bucks’ O rating last season with Giannis and Semi on the court: 92.6.

Ojeleye will earn a team-friendly $1.4 million this season, which is fully guaranteed. The Celtics have a team option for the next two seasons, which become fully-guaranteed if he is not waived prior to July 1st of each season.

Brad Stevens considered Semi an elite defender in his rookie season, and this game was a bit of a break-through for him on offense. His teammates are looking for him, and Semi's 3-pointer resulting from an assist from Gordon Hayward and his slam on a feed by Al Horford illustrate that. He came into the League as a 3-and-D guy, and hopefully the shooting has arrived. He is a keeper.