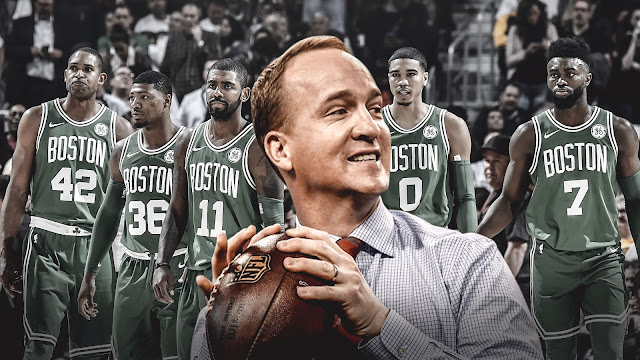 As die-hard Boston/New Englander sports fanatics, we've spent many a Sunday rooting against shoe-in-first-ballot-Hall-of-Famer Peyton Manning. But this past Monday, we had a reason to cheer for Manning. Before the Boston Celtics took on the Denver Nuggets in the Mile High City, Head Coach Brad Stevens had a treat for his squad: Peyton Manning would be meeting with the team, then watching some game film.

Cs assistant Micah Shrewsberry said Peyton Manning genuinely just wanted to watch film with the Celtics because he missed watching film. Didn't totally get what was going on but just loved being in the environment.
— Adam Himmelsbach (@AdamHimmelsbach) November 6, 2018

Peyton and the Celtics? You may be asking what the connection is. It's OK, I was too. Well, it turns out that Manning and Brad Stevens are close friends, dating back to Peyton's days with the Indianapolis Colts and Stevens' days coaching the Butler Bulldogs.

Personally, I was torn when I heard this. On one side of the coin we have a guy who, as I mentioned, we always cheered against. The other side of the coin, the non-irrational logical side, was ecstatic. I mean, Peyton's one of the all time greats, so any time you can get a legend of his caliber to meet with your team, to impart wisdom, tell gridiron tales of perseverance and overcoming adversity, it's a no-brainer. Especially to the young bucks on the team.

Let's face it. We needed exactly this. Here we have an uber-talented Celtics team, but something just doesn't seem to be right.

Is Gordon Hayward still trying to work his way back from injury?

Is Kyrie Irving still dealing with when to take over and when to let the others give it a go?

Are the young guns -- Jayson Tatum and Jaylen Brown -- trying to find their way now that we're at full strength and there are more mouths to feed?

If you think about it, bringing Peyton in to meet the team makes sense. He's a lovable character, has that same aww-shucks good old boy demeanor as Stevens, but he was absolute maniac when behind center and in the film room.

Overcoming injury. Turning off the noise. Just pure focus. Sound like something the Celtics can relate to?

I guess having Manning talk to the good guys in green doesn't sound so nuts after all.

Here's what Celtics leader and resident master ball manipulator Kyrie had to say about it:

He’s a championship winner, unbelievable preparer of the game. He was doing it for so long, thinking about the injuries he had to endure. It was great to see him just come and talk to your team...just having an echelon of greatness coming and talking, there’s nothing like it.


Now, obviously we didn't get the win in Denver, thanks to a what-the-hell-happened-to-our-defense-phenomenon and a lights-out shooting display by Jamal Murray. But hopefully Peyton was able to offer a few pearls of wisdom, hopefully sparking a fire under this underperforming squad to go on a solid winning streak.

Something tells me Peyton's presence, along with Jamal Murray's disrespecting the team with his last second shot attempt, will do just that.

How do you all feel about Peyton talking to the Celtics? For or against? Why? Let us know in the comments below.