NBA BEWARE: Kyrie is back to his old self 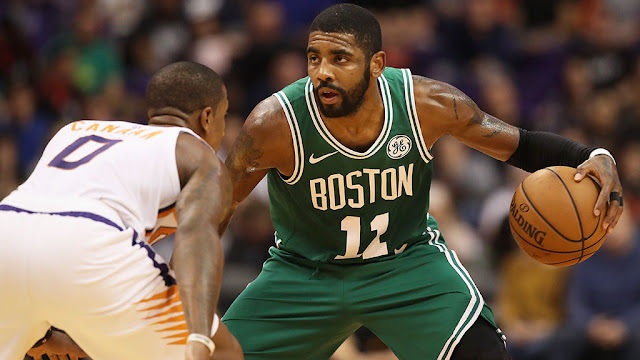 After a slow start to the season, pundits and fans alike were questioning whether Celtics superstar Kyrie Irving was over his injury, or whether he was just playing passive to get the other guys involved.

To say he, along with the rest of the gang, were struggling would be an understatement. The Celtics go-to guy for the most part this season was second-year stud Jayson Tatum. But as of late, he's lost his way. I know he'll get it back -- he's too talented not too -- but in the interim we need guys to bring their A-game on a consistent level. That's where Kyrie comes in.

With the Celtics reeling, Kyrie Irving has stepped up. Big time. Maybe it was the haircut that provided additional aerodynamics, allowing him to propel down the lane with superhuman speed as he confused defenders with his dribbling exhibitions like an expert 3-card molly street hustler shuffling cards at blinding speed.

Personally, I know it was just Kyrie being Kyrie. The same killer who showed his skills during the NBA Finals back in 2015 is here. He's healthy. He's determined. And he's not going to let this Celtics team go down. Like last night, for instance. As the Celtics failed to connect on open jumpers and layups alike, falling down by as many as 22 points to the Phoenix Suns, I had flashbacks of that terrible game against Orlando.

And then came Kyrie.

When it was all said and done, Kyrie carried the Cs to victory, dropping 39 points on 13/28 from the field and 6/13 from distance. Shot after clutch shot -- not to mention clutch assist to Marcus "Ice In My Veins" Morris who nailed the three that sent the game into OT.

In OT, Kyrie was, well, just watch. Even when he wasn't scoring, he was making the right play.

The team in the second half, I know who that is. The team in the first half, that's not who we want to consistently be on any stage. We learned a lot about staying resilient.

While our record doesn't aptly correlate to those numbers (not yet anyway), if the last five games are the appetizer to the many entrées -- and hopefully delicious dessert in the shape of a large green banner with the #18 embroidered on it -- then the league better beware.

What do you think? Will Kyrie's heroics be the spark the Celtics need to rattle off a win streak and finally be the team we all believe they are? Let us know in the comments below.