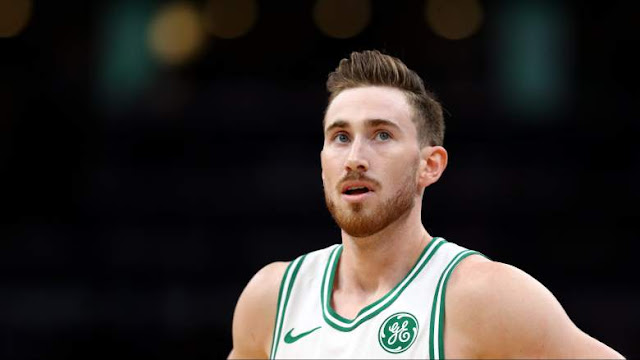 Coming off a dramatic victory in Phoenix, the Boston Celtics (7-4) continued their five game road trip, taking their talents to Salt Lake City to take on the Utah Jazz. For the record, the Jazz are 1-4 at home, while the Celtics boast a 4-3 road record.

This game marks Gordon Hayward's first game with the Celtics playing on the floor he called home for the first seven years of his career, and comes approximately eight months after what should've been his debut game back on March 28, 2018.

Here's a friendly reminder of how that game ended.


Jazz fans are definitely still salty that Hayward left Utah to join his former college coach and Kyrie Irving, someone whom Hayward reportedly had interest in joining forces with back when Irving was in Cleveland. As expected, Gordon received a steady shower of boos from Utah faithful during warmups, as well as during intros. A lot of pressure was on his shoulders today, but not only for the obvious. Gordon and the Celtics were without the services of their leader, Kyrie Irving, who was not with the team to attend his grandfather's memorial services.

Stepping in for Kyrie in the starting lineup was Terry Rozier III, who showcased stellar play during Irving's absence during last year's storybook playoff run. Another storyline to watch was another hopefully epic Jayson Tatum vs Donovan Mitchell matchup. Tatum had struggled as of late, but look for him to bounce back in a big way tonight.

The Celtics got the party started off with a 10-2 run, going 4/4 from the field, including triples from Rozier and Tatum, a streaking layup by Hayward and an emphatic dunk by Al Horford.

GAME NOTE: Gordon Hayward is being boo'd every time he touches the ground. He was also cheered when he fell to the ground. Stay classy, Utah.

The Jazz quickly responded with a 12-0 run of their own after the timeout, while the Celtics went cold before Horford hit a corner three to stop the bleeding.

The Jazz started the game 1/4 from the field, then proceeded to hit 10 out of their next 11 shots, including back to back triples to take a 24-18 lead with just under three minutes to go in the first frame.

GAME NOTE: Aron Baynes is in the game rocking a black headband that, along with his ponytail sticking out, make him look like a Cobra Kai graduate.

The see-saw battle continued after a Celtics timeout, with the Cs going on a 7-0 run, thanks to their elite defensive lineup (Baynes, Smart, Ojeleye, Morris, Tatum).

GAME NOTE: The Celtics have scored 10 points off turnovers, while the Utah have scored 2.

The second quarter was relatively uneventful, up until about two minutes to go when Joe Ingles put on his Steph Curry uniform, knocking down three consecutive triples. Former Celtic Jae Crowder added another three-ball, capping off a 12-3 run to end the first half.

GAME NOTES: Jayson Tatum with a couple sweet buckets close to the bucket. He's looking more like the rookie year Tatum we saw last year. He led the Cs at the break with 12 points (4/7 FG) while Joe Ingles led the Jazz with 20 first half points on a blistering 8/9 from the field (4/5 3pt FG). Mitchell with 6 points and 3 turnovers.

The Celtics have hit 20 field goals on 16 assists and are shooting 42.6% from the field. Boston also has 15 points off turnovers.

Terry Rozier III is trying to find his footing. His shot is flat and his head doesn't seem to be in the game, as evidenced by a horrendous, highly-contested three ball attempt in their final possession, instead of moving the ball around for a better shot.

The third frame began right where it left off -- Ingles still isn't missing -- and neither is anyone else in a Jazz uniform. Meanwhile, well, we are.

CAPTAIN OBVIOUS MOMENT OF THE GAME: I wish Kyrie was playing.

This pretty much sums it up.

No ball movement for Boston. No defense, either.
— Chris Mannix (@SIChrisMannix) November 10, 2018

Leading this third quarter are the zebras who've gone whistle happy. Both teams saw themselves in the penalty with 7:32 to go in this frame.

Jae Crowder and Marcus Morris are getting into it -- and I'm all for it. The Celtics are lacking some fight right now, trailing 79-63.

And then this happened.

Following Jaylen's poster on Gobert, Boston finally got a stop which turned into an easy Rozier transition layup, trimming the lead to 16.

Coming out of the timeout, the Celtics defense finally looking like the #1 ranked "D" in the league, turning stops into scores as they started the quarter on an 8-0 run. The Jazz responded, however. keeping the Celtics at bay with a double-digit lead.

GAME NOTES: The 3rd quarter was a free throw shooting contest more than anything. The Celtics went 9/9 from the charity stripe, while the Jazz, thanks to the flopping prowess of Ricky Rubio as well as some early lazy defense, shot 11/12.

Marcus Morris continued his stellar contract year play; he leads the Celtics with 13 points, tied with Rozier. Hayward with 11, while Ingles still leads everyone with 25 points and 7 dimes.

Starting off the fourth, the Celtics continued their stellar defensive effort. The operative word being effort as their initial defense was solid, but Derrick Favors was there on three separate possessions, tipping home missed layup attempts.

The Celtics, however, were able to counter with a Morris three-ball, a Horford alley-oop, and a oh-God-please-don't-shoot-it-but-please-make-it three ball by Marcus Smart.

"Hit singles and win the next possession," Stevens said to the Celtics during the break.

And win the next possessions they did, trimming the lead down to 4. But a series of ill-advised shots (a vast understatement) by Smart and Rozier turned into a triple by Rubio, extending Utah's lead back to 7 with 5:31 left in the game.

That was all followed up by a couple costly missed layups by Tatum cost the Celtics a chance to cut the lead down to 3 with :55 to go. SIDE NOTE: He was attempting both layups over the outstretched arms of Gobert.

Naturally, as the basketball gods have preached for decades now, one bad shot will lead to an easy one for the opposition. Jae Crowder proved that, nailing a crucial three with 0:28 to go.

After the timeout, Smart made the first of 2 free throws after beautifully selling a foul on Mitchell. He intentionally missed the second, but it was for not as Gobert grabbed the board and proceeded to make both of his free throws.

POST-GAME NOTES: 123 points for Utah against the league's #1 defense. I must say, the Celtics have allowed themselves to get torched three consecutive games: first by Victor Oladipo, next by Jamal Murray, and tonight by Joe Ingles and Jae Crowder, not to mention 15 from Derrick Favors who was 5/5 from the game, putting back 4 crucial putbacks on offensive rebounds.


“As good as we were defensively in the first nine games,” says Brad Stevens, “I don’t think we’ve been as good in the last three.”
— Boston Celtics (@celtics) November 10, 2018

UTAH:
Joe Ingles tied his career-high with 27 points, while Crowder added 20, Mitchell had 21, and Gobert/Rubio both dropped 17.

The Celtics difficult schedule (currently the toughest in the league) continues on Sunday when Boston treks to Portland to face the 9-3 Blazers -- currently sitting in second place in the Western Conference.

Hopefully we'll be able to play lockdown defense for 48-minutes and come out victorious. And hopefully we won't find ourselves in another big hole to attempt to dig out of.