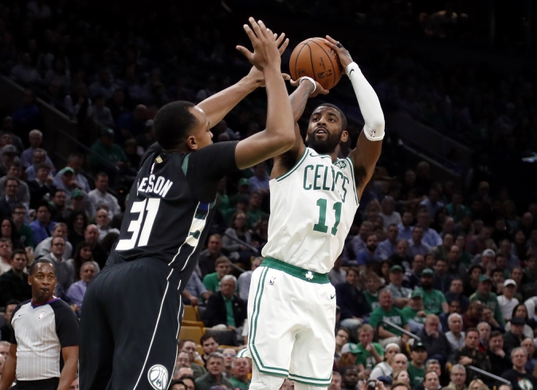 The Boston Celtics put an end to the Milwaukee Bucks undefeated season with a 117-113 victory at home. The C's hit a franchise record 24 three-pointers and managed to hold off a late Bucks surge to hand them their first loss of the season. Kyrie Irving had another big scoring night with 28 points on 50% from the field (6-12 from three) to go along with 7 assists to lead his team. Al Horford chipped in 18 points, 8 assists, and 5 rebounds while Gordon Hayward had one of his best games of the young season with 18 points, 5 assists, and 4 rebounds.

For the Bucks, Giannis Antetokounmpo was a nearly unstoppable force as he notched a game-high 33 points and 11 rebounds, and his teammates Malcolm Brogdon and Khris Middleton scored 16 points a piece as well.

The Celtics took the early advantage as they held the Bucks to 31.8% shooting in the 1st quarter. Semi Ojeleye got the start in place of an injured Jaylen Brown and passed the test in his first shift against Milwaukee's resident monster and potential MVP candidate in Antetokounmpo, as he held him to just 2 points in the opening frame.

Horford and Irving reversed their regular roles on a nifty alley-oop early:

The Bucks rattled off a 13-2 run to start the 2nd quarter to take their first lead of the game, but the Celtics warmed up from the outside with three straight made 3-pointers to regain the advantage, which the C's managed to hold into the break (55-53).

Hayward had his best half of the season, leading his team with 13 points on 4 of 5 shooting:

Kyrie gets fancy with the dribble and finds Gordon for the jumper! pic.twitter.com/4kDMmkb391
— Boston Celtics (@celtics) November 2, 2018

The Celtics blew things open to start the 2nd half, as Irving started a 3-point parade as he knocked down three-straight threes to open up the 3rd quarter. Jayson Tatum and Horford followed suit with a pair between them and Ojeleye continued his best Brown impression as he finished his second dunk of the night with authority:

Tatum lobs it up and Ojeleye throws down the #SunLifeDunk4Diabetes! pic.twitter.com/iTbU5rZxhY
— Boston Celtics (@celtics) November 2, 2018

The C's shooting gallery opened up a 13-point lead midway through the 3rd quarter. In fact, the Celtics got so hot from the outside that they broke a franchise record for made three-pointers (it used to be 19) before the 3rd quarter even ended. They finished the 3rd up 15 points, 93-78, while breaking the aforementioned record shooting a shade under 50% from downtown as they made 20 of their 42 attempts (47.6%).

The Celtics cooled off to start the 4th, and the Bucks found themselves within three points with over 8 minutes reamaining in the game. But the C's stuck by the outside shot and back-to-back threes from Irving and Marcus Morris had them up 9 again in a flash.

However, the Bucks refused to submit as Giannis and Co continued to grind away at the Celtics lead and found themselves with a chance to tie the game in the closing seconds of the game with Drew Eric Bledsoe at the line with 12.8 seconds on the clock. He missed his first attempt thought, giving the Celtics the ball back with a 1-point advantage.

The Celtics managed victorious in the ensuing free-throw battle to end the game and walked away with the win, handing the Bucks their first loss of the season in the process.

Related: Warriors view Celtics as both similar and a Title-threat