The Boston Celtics have been struggling with their collective identity, trying to find a way to translate an embarrassment of riches in the talent department into a coherent style of team play, needing to find a way to play together as they have struggled against lesser opponents early this season. 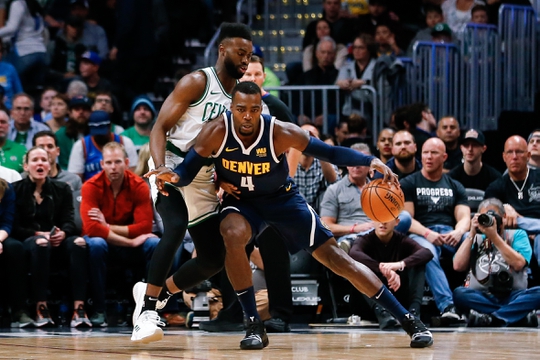 Heading into a tough away stretch with a stop in the mile-high city to play the Denver Nuggets, a team exceeding expectations early with an 8-1 record as much as Boston has had trouble, the Celtics came out aggressive with a more varied approach to offense on display almost from the opening tip.

Al Horford got the Cs on the board first, and Jaylen Brown led Boston early with help from Jayson Tatum and Kyrie Irving, closing out the first frame with a 34-19 lead.

The second quarter began with the Nuggets chipping into Boston's early lead with unanswered buckets from Gary Harris, Monte Morris and Malik Beasley, cutting the lead to eight. Denver flirted with making a serious game of it until Tatum and Gordon Hayward took it to the cup, stemming the onslaught from the Nugs.

Denver kept the pressure on, cutting it to 45-40 with 4:30 left in the half, with Irving and Murray trading treys, until the Nuggets took their first lead with a Paul Millsap three with 25 seconds remaining. Boston answered back with a three-pointer from Uncle Drew himself, taking the Celtics into the half up 56-54.

The third frame opened with a Juan Hernangomez triple in response, but Kyrie took the lead right back with a deep shot of his own. The two teams traded leads back and forth in a tight, slow-paced contest (with a spectacular rebound and dunk by rookie Robert Williams) until Monte Morris began to heat up, closing out the quarter 88-81 Nuggets.

The final frame began with Gary Harris sending Tatum to the stripe, who followed up with a layup a few plays later to cut the lead to three before Trey Lyles doubled their deficit with an eponymous shot of his own. Murray began to heat up late, protecting Denver's lead, and with everyone but Jaylen Brown content to settle for jumpers, the Celts fell victim to their shot selection yet again, losing 115-107.