Boston is neutralized by the Orlando Magic, 93 - 90


The Boston Celtics began the season knowing they had work to do to get to the level they want to be by season's end, and tonight's matchup against the Orlando Magic was a step in that direction. 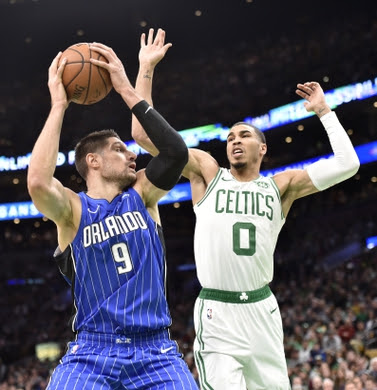 With Aron Baynes taking time off to rehab a balky hamstring, the starting lineup was shaken up a bit, Gordon Hayward starting at the four in place of Al Horford, and Al moving to the five for the night.

Evan Fournier got the Magic on the board first with a dunk after an ugly stretch of ball to start the game, and Horford tied it up soon after with a trip to the charity stripe.

Orlando started hot and aggressive, jumping out to a six-point lead early, while the Cs' offensive woes continued until Hayward hit a pair from beyond the arc.

That was a short reprieve, however, as the Magic couldn't miss, and only Horford and Mook Morris kept Boston in the game.
Coach Brad Stevens subbed in the second unit early in the hopes of generating some buckets or at least stopping the bleeding, but it wasn't until late in the half when the starters came back in that the Celtics started to get things back under control again.
Boston would flirt with making a run, only to see Orlando answer back with greater effort and better shooting. Eventually, however, the Celts' starters cut the lead to 48-45 Magic on a flashy jumper by Jayson Tatum to close out the frame.

Jayson Tatum buries the jumper to close out the half for the @celtics!

The third quarter started inauspiciously with a quick dunk by Nikola Vucevic, but while Mook and Kyrie Irving threatened to spark a run for what seemed like the hundredth time of the evening, Boston's offense continued to sputter like an engine with the timing belt on wrong.
An angry timeout by Stevens at the seven-minute mark delivered some of the game's most crisp action, resulting in a trey for Horford. Still, Orlando seemed able to get to the rack or hit from anywhere on the floor while until Robert Williams checked in at just under four minutes left in the frame.

While the Time Lord didn't directly have much of an impact, his high-energy rebounding and activity seemed to energize his teammates. Irving started to heat up late in the quarter, and Hayward drew Boston to within five to end the third with a late trey.


Robert Williams forces a miss - he affected that shot - and Kyrie drops one in at the other end. I'm tellin you - Williams can change games with his activity
— Marc D'Amico (@Marc_DAmico) October 23, 2018

The fourth quarter began with a Smart jumper he seemed to will into the cup, and blocked a shot on the other end a few plays later. Seemingly out of nowhere, the Cs' offense sparked to life at the ten-minute mark at just the moment the Magic started to sputter.

Jaylen hit a trey to get the Cs within three, but Jonathan Isaac answered back with a jumper of his own with just a minute left to play. Al scored a quick bucket and Irving another, leaving the Magic up one with 14 second to go. Augustin got sent to the line with seven seconds on the board, converting both, and Boston tried to answer back, but couldn't overcome their sluggish play.
For more stories by Justin, click here.