Kyrie's feeling great - and hasn't spoken to Jimmy Butler since 2016


You can put those rumors to bed, folks...for now.

In a recent article, famed sportswriter Jackie MacMullan got the scoop on Kyrie Irving. 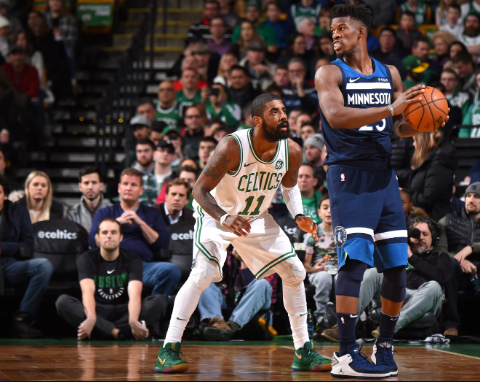 If you haven't read it, I won't spoil it for you, but one key element stands out - Irving is aware of the rumors about him wanting to play with disgruntled Minnesota Timberwolves star Jimmy Butler in New York...

"Who wouldn't be a part of this?" Irving said, gesturing to Boston's new practice facility. "Who wouldn't want to be a part of Jaylen Brown and Jayson Tatum and Al Horford and Gordon Hayward? People keep saying, 'Why won't he commit to Boston?'

Irving, of course, noted the financial hit he'd have taken if he'd signed the extension, saying (per MacMullan):

"I'm accepting it's going to be a constant story ... It's a point in my professional career where it is a big-time decision. I've been away from Cleveland officially for a year now, and I'm finally getting acclimated in Boston. ... Last year it was almost like a trial. There was a lot going on. It was overwhelming at times, to be honest. The focus needed to be directed on getting better and helping my new team win a championship, instead of focusing on all the outside noise [leaving  Cleveland] that affected me personally ... I was afraid to admit that initially, because I wanted to be prideful and handle everything. So, it's been a matter of figuring it out and growing."

Irving's words sounds like the last thing you'd expect to hear from someone planning to leave Boston, as evidenced when Kyrie spoke on what the rumors are doing to him:

"It only affects me when it affects my teammates. I keep them abreast of everything. We need to be communicating like that, because there are very few years where you get a chance to be a championship team -- unless you are Golden State."

Go ahead and give this a read, because it's quality sports journalism. While you may hear me gripe about ESPN a lot, Jackie is a real gem, and as per usual, you don't want to miss her newest article.