Jabari Bird choked, kicked, and held his girfriend for hours last Friday, according to police reports of her testimony, reported by the Boston Globe's Travis Anderson.

The allegations are very serious, and should be taken as such. 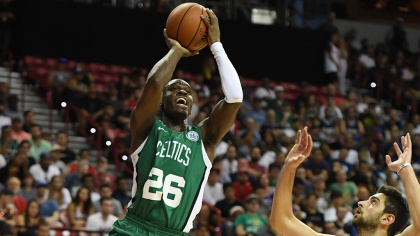 Evidently, after an argument early in the afternoon on Friday, Bird and his girlfriend (still maintaining anonymity under Massachusetts law) got into an argument that escalated into him choking her repeatedly, including one time into unconsciousness, while refusing to let her leave for four hours.

The alleged victim reported Bird to have had some kind of emotional incident mid-attack, presumably related to the hospitalization, causing him to collapse to the floor, from which the woman said she helped him up before leaving.


My guess is that Jabari Bird will be waived by the Boston Celtics now that court proceedings have begun. Boston could petition for Adam Silver to void Bird's contract under the new domestic violence policy in the NBA. This one could go on for a bit contract-wise.
— Keith Smith (@KeithSmithNBA) September 13, 2018

For now, Jabari is being held on a $50,000 bond, which, for some reason, he does not seem to be able or at least willing to pay. The Boston Celtics, however, have since issued a statement, noting "The Celtics organization deplores domestic violence of any kind, and we are deeply disturbed by the allegations.", according to Anderson.

It sounds like Bird's days with Boston are over almost before they began, as they should be from the sounds of it. While he certainly deserves his day in court, the situation looks very bad indeed.