A large part of Jayson Tatum's off-season conditioning program included gaining strength and muscle. He was successful, coming into training camp at roughly 212 pounds, up from the 204 pounds on draft night. He doesn't look like Dwight Howard yet, and I doubt he wants to - but the added lean muscle most certainly gains him some confidence and swagger. 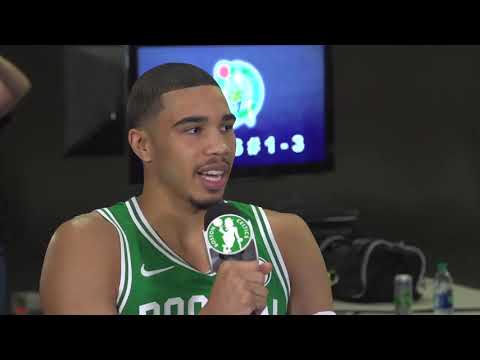 I am always careful to be skeptical of listed heights of NBA players, but I did a bit of research, and it appears Jayson is the second-tallest member of the Celtics proposed starting unit. Gordon Hayward was drafted at an even 6'8" and 211 pounds. Tatum skipped the Draft Combine, but he was originally listed at a shade over 6'8" prior to draft night.

By my closest estimate, Jayson is close to 6'8.5", while Hayward still stands at 6'8". Jaylen Brown is clearly shorter than both and most likely remain at roughly 6'7". Kyrie Irving is the shrimp of the group at 6'3", and Al Horford is the tallest at 6'10". Right now, if I had to guess who would play power forward from the starting-5, it would be Tatum due to the small height advantage over Gordon and the greater wingspan. And I can also envision Hayward playing the role of point forward during specific match-ups. Tatum seems ready to go (per NBA.com's Taylor C. Snow):

Jayson Tatum walked into the first day of Celtics training camp Tuesday morning with a little extra swagger in his step. He was also carrying seven extra pounds of muscle on his body, and that's no coincidence.

The 6-foot-8 Celtics wing entered his NBA first offseason understanding that he needed to add a bit of strength to his 205-pound frame in order to finish more efficiently through contact against larger opponents, so that’s exactly what he focused on throughout the summer.

Tatum hit the gym consistently this past summer, he ate well and he returned to camp with a little extra bulk. He revealed to Celtics.com that he now weighs in the 212-213-pound range.

“I’m working on finishing and working on not getting bumped and pushed around as much as I did last year,” Tatum said. “So, I’ve been getting better at that.”

Tatum's work with both Kobe Bryant and Penny Hardaway in the off-season certainly didn't hurt his confidence coming into training camp. The following via NBA.com's Taylor C. Snow.

Part of that confidence boost is also a result of Tatum’s offseason workouts with Kobe Bryant and Penny Hardaway. He claims that the pair of NBA legends helped to instill a mindset within him “of attacking the rim strong, trying to punish guys and dunking everything.”

"...attacking the rim strong, trying to punish guys and dunking everything." Sounds like Jayson's almost-legendary jam on Lebron James. We can expect more of that type of thing coming up.