In early April, Brad Stevens told us that Gordon Hayward was a "long, long way away" from returning, and he was right on. He now tells us that Gordon looks good and will be playing "5-on-5 very, very, very soon". That is three very's compared to two long's. He even had to look at his watch, indicating the scrimmage might even be imminent. Great news indeed. 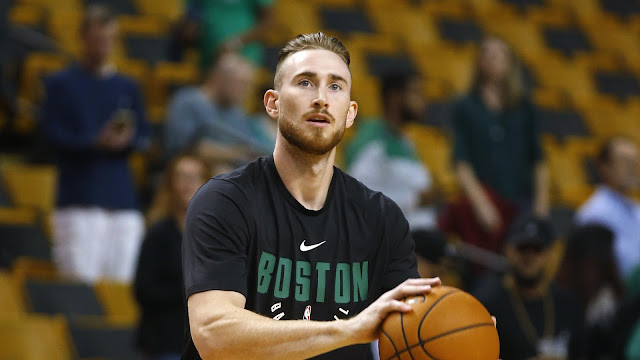 New from @SteveBHoop: Gordon Hayward may be running, but Brad Stevens says he's 'a long, long way away' https://t.co/ojeGPypY75 pic.twitter.com/q1FM4OifBf

This is what all of us have been waiting for. Think about this! At the beginning of last season, Gordon, Kyrie Irving, Jayson Tatum, Aron Baynes, Marcus Morris, Daniel Theis and Semi Ojeleye were all new to the team. Three of those newcomers suffered season-ending injuries at some point in the season. This season, the entire crew comes in healthy and ready to compete for a Championship.

Brad Stevens on Gordon Hayward: "He looks good. ... You can’t tell anything [about the injury] from my untrained eye. He looks good. He’ll be cleared to go, some 5-on-5 here very, very, very shortly -- like," [glances at watch] , "anytime soon." pic.twitter.com/RNabSE2NtD

Celtics training camp starts in a few weeks, and the troops know each other very well by now. They are no longer strangers. Things are looking very, very, very promising.

Aron Baynes: "Last year at this time we were just learning people’s names; this year we can get into the final points of the systems that we’re learning ... It’s definitely exciting that we’re starting at this base level compared to where we were last season." pic.twitter.com/PXw0S4IOPX