Expect to see more of Al Horford at center this season


Al Horford openly admits that in the past he has not been thrilled when having to play the center position, probably feeling he was better-suited to play power forward. His thinking has changed. 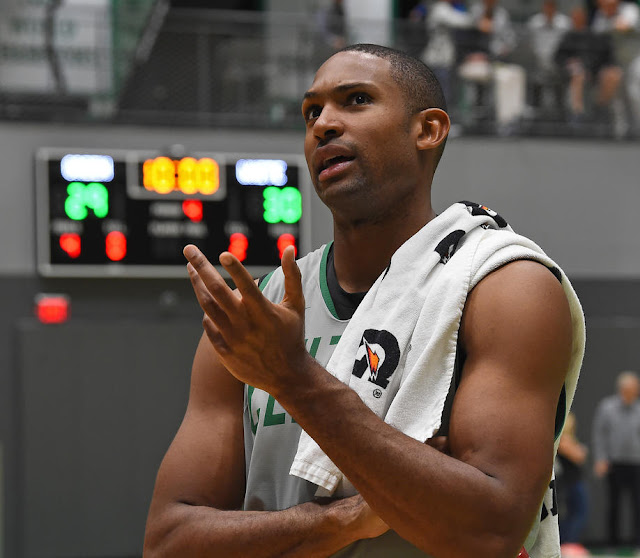 Al defines the term versatility in the NBA. He does not excel at any one thing, but he does at doing virtually everything at least fairly well. He normally won't score a ton of points or haul down a bunch of rebounds. His handles are good, but not excellent.

He just does what is needed at the time, and for this season he will be playing the five quite a bit. Here is the Boston Herald's Steve Bulpett on the subject, followed by Al's reaction:

For the Celtics to reach their very reasonable goal — playing basketball next June — sacrifice and bending to the needs of the team will be required. Horford is prepared to do his part. He’s never been all that excited about playing center and getting banged on by some bigger people, but he’s all in on it now, making it even more likely that the Celtics will start the same five they did in Cleveland on opening night last October — Horford, Hayward, Tatum, Irving and Brown.

“Well, the way that the game keeps changing, playing the 5 works to my advantage,” Horford said. “And with the lineup that we have and all the guys that we have, I feel like we’re most explosive if I play more 5.

So where does that leave Aron Baynes? He started most games at the five last season. I doubt he will see his minutes drop from the high-teens of last season, but most of his time will be on the second unit. And Big-as-all-of-Australia does a nice job of covering the big brutes of the League and challenging opponents to face him in the lane. Here is the Boston Herald's Bulpett and Horford on Aron's place in Brad Stevens' schemes:

And if he’s up against some beastly big man, he can always request the presence of Baynes, right? Horford laughed and replied, “’Aron, come here.’ Or I’ll just drag (the opposing big guy) out and make him guard me on the perimeter.”

Al Horford wasn't a fan of playing center before.

Now? "Well, the way that the game keeps changing, playing the 5 works to my advantage. And with the lineup that we have and all the guys that we have, I feel like we’re most explosive if I play more 5." https://t.co/gXBb3PXXo9

There you have it. Aron can rebound the ball and defend brutes under the hoop or smaller guys on the perimeter. But he doesn't have a history of shooting well from outside. Big, strong centers can give Al some problems, but Horford can do virtually everything else, including hitting from outside, or alternatively, passing inside to a cutter. Talk about weapons! Boston has many.