Are Jaylen Brown & Jayson Tatum the Reggie Lewis & Len Bias we were deprived of?

Now that we're into August, just passing the 25th anniversary of Reggie's death, it could be safe to say that both Brown and Tatum are off-limits regarding any trade possibilities, especially for the near-future (of course Danny made the Kyrie-trade last August, so you never really know).  But I figured now would be as good a time as any to think of the comparison.

I'll admit when I saw the NBA Jam t-shirt of Brown and Tatum (dope shirt btw, here's a coupon if you buy) I couldn't help but think of Reggie and Len.  Those were the guys who would've been in their prime when NBA Jam was being played.

The most logical comparisons from a "position" standpoint, and I use that term loosely given the positionless league that exists now, Reggie was a guard/forward (as is Jaylen) while Len was a forward (as is Jayson).

From a size perspective I'd say this is really close. Reggie was listed at 6'7 as is Brown.  Tatum is mostly listed at 6'8, occasionally 6'9 while Bias was almost always listed at 6'8, although he's somehow grown to be 6'9 on his Wikipedia.  So uncanny right off the bat that all 4 guys are roughly the same height.

Now how similar are the games of the 4 guys? I figured let's use the NBA Jam metrics (as rudimentary as they are) in basing comparisons.  First off, Reggie and Jaylen.

Speed: It'd be really tough to know who was quicker, Reggie or Jaylen but I'll give Brown the advantage since he's shown signs of being one of the most athletic players Boston's ever had (Gerald Green, Kedrick Brown are also in this conversation). But if it is, it's only by a bit.  Reggie was one of the "Zip Boys" along with Dee Brown, Kevin Gamble and Brian Shaw. Advantage: Brown


3-Pointers: Reggie didn't shoot them, really at all (who did back then?) Jaylen's improved tremendously after his first season so we would have to give him the advantage in that category based just on that.  However Reggie's mid-range game was second to none in Celtics history (right there with Bird, Havlicek, Pierce, etc). He was one of Boston's deadliest shooters from 15 to 20 feet.  So while Brown is technically the better 3 point shooter, knowing if Reggie played today and his skillset, I'm declaring this one inconclusive.  Advantage: Inconclusive

Dunks: Jaylen is one of the more renown dunkers in Celtics' history (think of Dee Brown, Gerald Green, Bill Walker) and while Reggie was no slouch, he didn't quite have the explosiveness of Jaylen.  Advantage: Brown 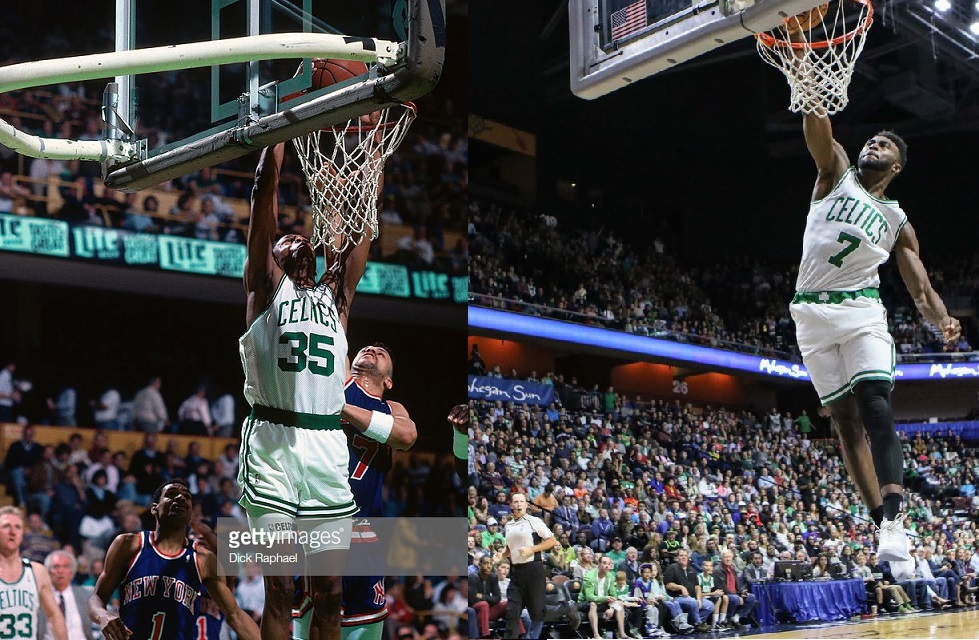 Defense: Jaylen Brown is an excellent defender. He has the size and length to really bother opponents and I was impressed by his perimeter handling of guys who run off screens and shoot (Redick, Bellinelli) without losing them. However Reggie played in an era where defensive heights went to new lengths. And he's known for guarding the greatest player of all time and giving him fits. This one is closer than you think and eventually Brown may surpass him but as of now, Advantage: Lewis

Comparing Bias to Tatum might even be more challenging than Jaylen and Reggie as Len never played an NBA minute.  So the comparison goes more to Bias' college career vs Tatum's rookie campaign.

Speed: Bias' athleticism was unmatched. Tatum moves really well, and his ability to catch and shoot or fit in with the offense on the perimeter exceeded my expectations for his rookie campaign.  But anyone who saw Bias play knows the answer on this one. I truly feel Bias possessed LeBron's athletic abilities 17 years before James entered the league. Advantage: Bias


3-Pointers: Like Reggie, Len didn't usually shoot from that deep.  In looking at his college numbers I was surprised to see he took 11 three pointers in his 4 year career at Maryland (he made 3).  However all 11 came his freshman year.  Meaning after his first season, he resorted to not shooting 3s. Len had a picturesque stroke and was unstoppable in that 13 to 16 foot range.

Also from having seen Bias play, and the "power" element to his game, I don't think it would've become a regular part of his game.  If you told me Bias would've had a season similar to Charles Barkley in 1993, where he began shooting a lot of 3s, I wouldn't believe it (Barkley actually had 3 seasons in excess of 200 3 point attempts.)  Tatum meanwhile is a natural from the 3 point line.  He can catch and shoot or work off the dribble.  His stepback, where he takes one dribble and makes sure he's behind the line (sorry Eddie House) is a thing of beauty.  Advantage: Tatum

Dunks: Bias won the Slam Dunk Championship at the Red Auerbach basketball school in the summer of 1985.  All the kids ranted and raved about the counselor.  If you've seen footage of Bias, you know his capabilities attacking the rim.  So it might be startling to give him the advantage considering Tatum's throw down on LeBron last playoffs.  Don't get me wrong: the Tatum dunk was classic.  But dunking was more of a part of Len's game then I ever foresee it being for Jayson.  Advantage: Bias

Defense: Len Bias would block shots and bark at his opponents. But trying to compare someone's college defense to NBA defense is virtually impossible.  Tatum in his first year was great in Boston's system.  He battled with bigger guys at varying times inside but was also active in the passing lanes on the perimeter.  Advantage: Incomplete
So based on these stats you'd think Brown and Bias are better?  I actually don't.  I don't think Jaylen's gotten to Reggie's level quite yet.  And as far as my expectations for where Bias would've ended up, I do think Tatum still has some work to go to get there.  Of course Len never played a second so Jayson is already ahead of him.

Back when, Lewis and Bias were never actually Celtics' teammates. Len was drafted in 1986, and died 2 days later never even suiting up for Boston.  Reggie was drafted in 1987 and played 6 seasons before his ill-timed death.  An argument could even be made had Len lived, maybe Boston eclipses the 65 wins LA had in 87 and winds up getting the last pick in the first round, instead of the penultimate one where they snatched Reggie.  Conversely the Spurs, who got the last pick in that draft due to the Mychal Thompson heist for LAL, pick one spot ahead of Boston. Do they know about the local Northeastern kid?  This was pre-RC Buford so I'm guessing they don't.

What does the greatest team of all time (86 Celtics) need? A shot of athleticism.  If there's one criticism of that squad is that they weren't an amazing athletic bunch.  I'd say Danny was probably their most athletic guy.  Sam Vincent had some speed but barely played.  Injecting Bias and Lewis in subsequent drafts into that team would've been unreal.

So who saw them all play? What are your thoughts?

I'm not one to believe in reincarnation and as you can see in my assessment, there's certain things each guy did a bit better in my opinion. But all these years later, after being deprived of something so magical as a Bias and Lewis fast break, bear witness to Brown and Tatum and enjoy what they do. Who knows: maybe they'll even win a few extra titles for Boston to make up for those lost years of the 1990s.  Ya know, in honor of Len and Reggie.

For more on Len Bias:
Seven Hours Later: My Memories of Meeting Len Bias on the night he died
30 Years in 30 Days Index
A Night To Never Forget: A Personal Account of Len Bias' Day in Boston
Day 22: That time Reggie Lewis played Len Bias