Shane Larkin heading back to Euroleague 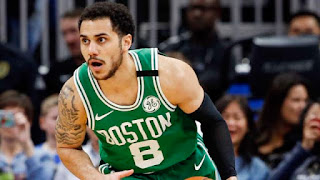 It now looks like Shane Larkin is heading back to the Euroleague on a one-year, $1.8 million offer from Anadolu Efes.

After playing a back-up role for the Celtics last season, Larkin was truly trying to find a significant role with an NBA team again this season. Playing for Brad Stevens, Shane had a critical role with Boston, filling in at the point guard position and injecting energy every time he entered the game.

Celtics free agent guard Shane Larkin confirms to me that he is leaving the NBA to sign a $1.8M, one-year offer sheet with Anadolu Efes.

Larkin's season ended during the playoff series against the Philadelphia 76'ers when he collided with Joel Embiid, spraining his shoulder in the process. He didn't play again for the Celtics.

I am surprised that Shane could not find what he was looking for from an NBA team, but he will certainly play a large role for Anadolu Efes. His deal is only for one year, so with a strong showing in the Euroleague and complete recovery from the shoulder injury, we may just see him back in our League next season.