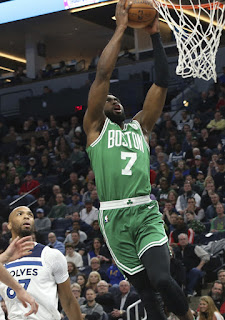 Jaylen Brown is annoyed that Lebron James left for the Western Conference by choice, and now fans are stating that Boston will rule the East, implying that Lebron blocked the Celtics from getting to the Finals.

Brown feels that Boston, with a full and healthy crew, was destined to take out Cleveland with or without James. And I could not agree more. The Celtics took Cleveland to seven games in the Eastern Finals and came reasonably close to taking them out at home in Game Seven.

The final score was 87-79 in Cleveland's favor, and poor shooting by Terry Rozier and Jaylen Brown, combined with the usual spectacular play of The King and an ill-timed (for the Celtics) resurgent game by former Celtic, Jeff Green, produced the Cavaliers' victory.

We can never forget that the Celtics team that came very close to a Finals match-up with the Warriors was missing Kyrie Irving, Gordon Hayward, and Daniel Theis. That trio will be back in action this season and Lebron, the NBA's version of Methuselah, will be one year older.

Jaylen Brown on LeBron leaving the East: "To be honest, I wanted him to stay. I don't like when people say now that LeBron's gone you're the favorite. That irks me. We felt like whatever he was there or wasn't there, we were coming out (of the East)." #Celtics

Beating Cleveland in the regular season, or in the playoffs if the Cavaliers make it there, will not be the same. There will always be fans who will swear that any Boston defeat of Cleveland happened because James is no longer blocking the way. That is the reason behind Jaylen's annoyance at Lebron's departure. But most fans realize that Boston was headed for Eastern supremacy no matter where James was playing.