It's not an exaggeration to say things almost got out of hand a few times in Game Two of the Eastern Conference Finals. 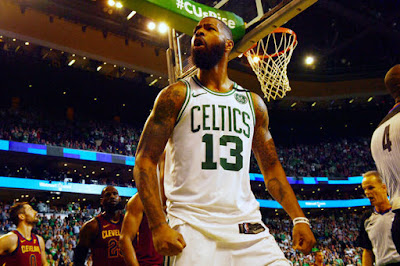 The Boston Celtics now hold a two-game-to-zero advantage over the Cleveland Cavaliers in the race to represent the East in the NBA Finals, and it took Boston absorbing Cleveland's best basketball with a fair amount of its' worst habits, as well.

And it wasn't a one-sided affair entirely, either, with Jayson Tatum nearly handing LeBron James a free trip to the dentist with his shoulder on a drive to the basket, though both sides were quite clear the contact was incidental and not intentional.

More than any other play, however, the shove JR Smith gave Al Horford in the fourth quarter that sent him flying into the crowd very nearly erupted into something much worse, especially when Marcus Smart lost his cool over the affair, and likely would have done something stupid had Tristan Thompson not held him back.

Watch the videos below to hear about the games tougher, chippy moments, and the overall situation general heading into Game Three this Saturday.