Videos: Celtics, Cavs both poised to sweep opponents, face off in ECF

The Boston Celtics and Cleveland Cavaliers might defy the odds on both ends of the equation, and face each other in the Eastern Conference Finals the way each team's respective series has been going. 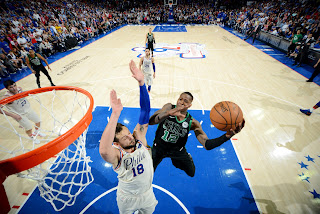 And that's not even the most remarkable part about it - with the way the second half of both team's seasons went, just about nobody saw them lasting long in the postseason (besides us, anyway).

The Cavs were a mess from top to bottom, and the Celtics, well, we all know how unkind the injury bug was to them in 2018.

Yet, despite all that, both teams might be poised to meet in the next round of the playoffs, and perhaps without either getting any more rest than the other, with both squads holding a commanding three-to-zero lead over the Philadelphia 76ers and Toronto Raptors, respectively.

Watch the video below to hear USA Today's Jeff Zillgitt break down each series in brief, with an eye to a potential meeting between the two beleaguered juggernauts, and a quick look back on how the Cs got into this position in the first place from NBC Boston.