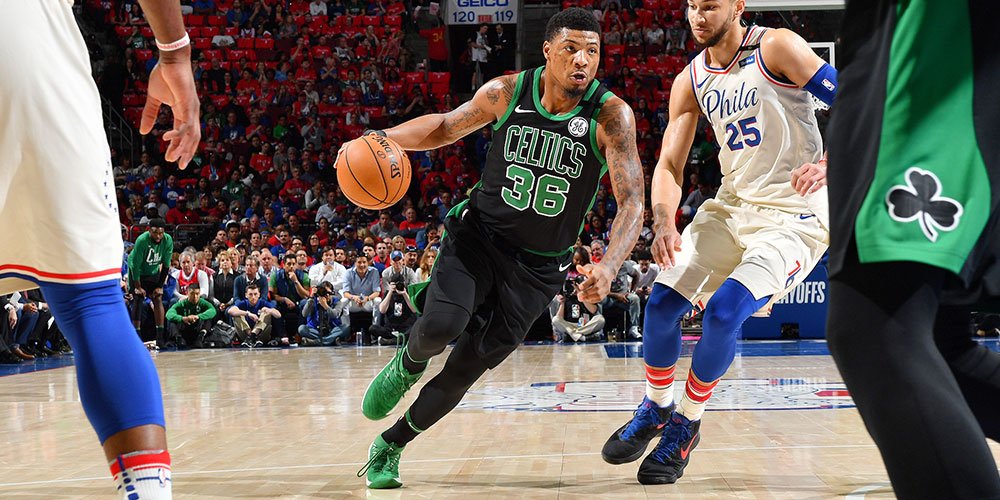 With a chance to close out the series and punch their ticket to the Eastern Conference Finals, the Boston Celtics fell to the Philadelphia 76ers 103-92 in Game 4. Dario Saric (25 points) and TJ McConnell (19 points) led the game in scoring, while Jayson Tatum had a team-high 20 points in Boston's loss.

Solid defense on both ends made life a little tougher for anyone attempting a shot in the first quarter. For the Celtics, though, it was an odd start to the contest that saw three of their first eight shot attempts be three-point attempts by Aron Baynes. In other words, Baynes took just as many 3pt attempts in the first four minutes of the game than he had in the entire regular season!

To Baynes' defense, he made one of those threes to register Boston's first bucket of the game after five previous attempts. In fact, both teams shot 1-7 out of the gate.

Right when the Sixers got hot from the field and went up by seven points, back-to-back treys by the Jays (Tatum and Brown) snapped Boston out of their early 2-11 shooting funk:

That being said, Boston and Philly both ended the 1Q hovering around the 30% shooting mark. This was due to a mix of respectable defense and a lack of attacking - half of Boston's 1Q shot attempts were three-pointers. As a result, it was a close, low-scoring game after the first 12 minutes:

The Celtics reestablished their interior presence in the second quarter - the reduced amount of three-point attempts and ample amount of foul calls both highlighted this. Boston was called for 12 fouls in the quarter alone, while Philadelphia was only marked with one. Four different Celtics players found themselves with three fouls apiece before halftime hit.

It wasn't just the fouls - the game really started getting chippy when Scary Terry Rozier and Joel Embiid got into it after a whistle:

Who would win in a real fight? Embiid or Rozier? 😂 pic.twitter.com/M2WbpbKEFw
— Yahoo Sports NBA (@YahooSportsNBA) May 7, 2018

Right after this scuffle, Embiid and Rozier exchanged metaphorical punches on the court when they each knocked down their own treys:

Although Boston's shooting naturally improved in the quarter, six Celtics turnovers gave Philly a lot more chances to score. Brett Brown's unit took ten more first-half shots than the C's and, despite shooting worse from the field, found themselves up by four at the half:

The Celtics find themselves in some early foul trouble and head into halftime down 47-43 to the 76ers. Rozier's got a team-high 8pts followed by Tatum & Smart who have 7pts apiece. pic.twitter.com/lhK0z11qSB

The Celtics and Sixers both opened the second half with a lot of energy. They each tapped into their strong offensive games, with McConnell and Ben Simmons leading the way for Philly and Tatum guiding Boston's scoring efforts.

Tatum was really in the zone after the halftime break, scoring his team's first four points on nifty moves like this:

Now you see me... pic.twitter.com/VqttO5ESYy

.@jaytatum0 weaves through the defense and finishes with the pretty reverse 🔥 pic.twitter.com/FNnweeo99s

Despite awesome play from the Celtics rookie, a well-balanced Philly attack saw them knocking down shots at an effective rate and building a 14-point lead. Boston seemed to get caught up in the heat of the moment, abandoning their style of play and resorting to isolations and hero-ball plays. Their assist numbers were much lower than normal, and AL Horford only attempted one shot in the whole 3Q. The Sixers were +16 in the paint entering the fourth quarter and stretched their lead to 11:

McConnell continued making a difference for the three-seeded Sixers, slicing up Boston's defense and making the right plays to further extend Philly's lead to 16. Marcus Morris got his game going at the right time, though, as Mook scored eight points over the course of a few minutes to keep Boston alive, albeit a 12-point deficit.

Boston had plenty of chances to chip into the lead, but they couldn't convert on the offensive end. They missed six of their seven shots from beyond the arc, shots that would've diminished their deficit significantly. At the time, they had only taken 13 total shots - half of their shot attempts were missed threes.

This was too much for Boston to overcome, as the Sixers held onto their lead tightly and closed out the game on top, 103-92.


The series shifts back to Boston, where the Celtics will have a chance to close out the series on the parquet in front of a rowdy home crowd Wednesday night.