This was the rematch Boston Celtics fans had been waiting for all season. 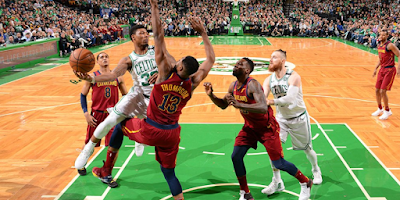 Whether looking back to the season nearly being derailed in the opening moments of the very first game of the season versus the Cleveland Cavaliers by Gordon Hayward's gruesome accident, last year's meeting in the Eastern Conference Finals (also marred by Isaiah Thomas' hip injury), or all the way back to the "Big Three" era, Celtics-Cavs has been the premier matchup in the East for a decade.

The environment in TD Garden was everything you'd expect for a home game of this magnitude, the crowd deafening at times, and the players clearly itching to get the contest underway. The opening tip was won by Boston, Jaylen Brown taking it right to the hole for a layup. LeBron James answered right back, the crowd booing from the instant he touched the ball.

Neither team could get separation early despite Kevin Love playing well, with both teams trading buckets from the floor and the line to keep the score close, even though James missed both of his first two free throws. Terry Rozier and Al Horford got on the board and Boston it's first lead since the the opening minutes at the 8:30 mark, 11-7.

Jaylen Brown and Horford added to the lead with a jumper and an oop off of Scary Terry, and then laid on the hurt from all over the court to take a 25-9 lead with three left in the first. Aron Baynes and Marcus Smart helped protect the lead despite Rodney Hood and Tristan Thompson getting on the board, but Jordan Clarkson getting a four-point play off a Baynes cut the lead down to 34-16 with less than a minute to play.

Tatum managed to get on the board before the end of the quarter, and Rozier his second bucket to start the second quarter. Soon after, another Jayson make gave the Cs their biggest lead of the afternoon, 40-21. LeBron, Thompson and Hood cut into the lead, but a Horford full-court assist helped Marcus Morris stop the bleeding with a layup.

Tatum hit a trey to put Boston up 47-27 with 5:30 left in the half, and a Smart layup pushed the lead to 22, and a Brown jumper briefly pushed the lead to 24. Love managed to dunk off a James assist to slow the bleeding for the Cavs, but, not to be outdone, Al dropped a trey to push the lead to 25, and another from Jaylen put it at 28. Kyle Korver cut the lead to 61-35 Boston to close out the half with a layup with just seconds left, but the Cavs went into halftime reeling.

The second half began with a lot of sloppy play from both sides until Horford hit a layup nearly two full minutes in, to which James quickly answered back. Korver hit a trey, and Hill got on the board with the same, combining with Smith to cut the lead to 22. LeBron cut the lead further with a pair of free throws, but Morris connected from deep to put Boston back up 70-47.

Love threatened to heat up with a three of his own, but Jaylen had another for him in return. Kevin and LeBron continued chipping away at the lead until Morris hit another three-pointer, putting the lead at 78-58 Celts. Love got himself to the charity stripe twice more - converting both - and a Jeff Green buzzer-beater cut the lead to just 14 going into the final frame.

The fourth quarter started with a Mook dunk, followed by a Smart three and a Tatum make that put the lead at 21 with nearly eleven minutes left in the game, forcing yet another Cavs timeout. Clarkson got Cleveland's first points of the quarter nearly two minutes in, and Hood as well soon after, but Smart, Tatum and Morris kept the Cavs at bay.

Tatum hit a shake-and-bake three, followed quickly by a Rozier bucket as an exclamation point, signaling there would be no late-game breakdown today and putting Boston up 96-68 with seven left in the game. Hood would score a jumper out of the timeout, but Terry countered with a make of his own.

Another Mook trey would set the lead at its greatest of the afternoon, 29 points, but Clarkson had a three of his own on the next play. Abdel Nader made his first appearance of the series, and immediately lost possession with a bad pass, helping Hood and Green cut into Boston's commanding lead.

Nader would redeem his SNAFU with a layup off a Greg Monroe assist, followed by another stretch of bad basketball by both sides - though it should be noted Boston was running its garbage time lineup against the Cavs', Cleveland having waived the white flag in view of the Cs' large lead. Not content to mop up in silence, Monroe and Semi Ojeleye both got on the board as well, granting the Celtics an impressive 25-point win.

The Celtics next face the Cavaliers at home for Game Two of the Eastern Conference Finals, at 8:30 pm EST this Tuesday, April 15th.