Will Celtics get Giannis Antetokounmpo or Kelly Olynyk in first round?


The irony in these potential match-ups is that Giannis Antetokounmpo was bypassed by the Celtics in the 2013 NBA draft. The Dallas Mavericks chose Kelly Olynyk at the 13th spot and immediately traded him to Boston. Dallas could have taken the Greek Freak 13th (he went 15th to the Bucks) and sent him on his way to Bean Town, but that was not the plan. 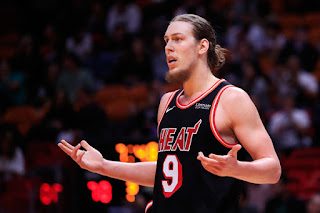 Kelly had a decent four-year run with Boston, but Giannis has thrived in the League. He has size, athleticism, versatility and talent. All he lacks is a three-point shot. He can play all five positions and is extremely difficult to stop. Giannis remains a member of the Milwaukee Bucks.

Giannis is known as the Greek Freak for good reason. He has freakish athleticism and is probably close to 7-feet tall now. Boston will have its hands full with him if Milwaukee is their first-round opponent.

I have read much of Kelly Olynyk's improved play with the Heat, but frankly, the slight increases in points, rebounds and assists are commensurate with the small uptick in floor time. Compared to last season with Boston, he is playing 3.0 minutes/game more this season with Miami. His points have gone from 9.0 to 11.6, rebounds from 4.8 to 5.6 and assists from 2.0 to 2.7. Nothing spectacular but I like finding that he is fitting in nicely with the Heat, while also hoping that he does not have a great first round if Boston is the opponent.

I often wonder what would have happened if Danny Ainge had arranged for Dallas to draft Giannis and then send him Boston's way. Except for having no 3-point shot, it seems he would have fit Brad Stevens style like a glove. But most NBA GM's had little information on Giannis, and that included Ainge. Kelly definitely has NBA talent, but he seemed to lack toughness and didn't appear to improve significantly from season to season. I liked Kelly as a Celtic, but the Greek Freak would have been a one-man showcase at TD Garden.

Danny Ainge dives deep on why he chose Kelly Olynyk over Giannis Antetokounmpo back in 2013. #Celticshttps://t.co/PNIyWQdt3c