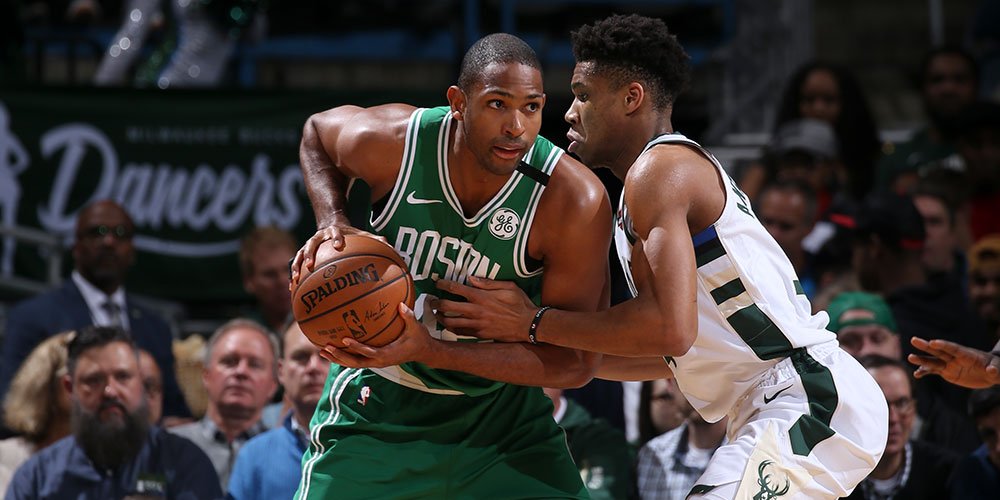 The Boston Celtics entered the night without a large chunk of their roster in a matchup with the Milwaukee Bucks on the road. The Bucks' dominance in the paint guided them past the Celtics 106-102 in a well-fought effort. The shorthanded Celtics started Kadeem Allen at point guard with Kyrie Irving, Marcus Smart, Terry Rozier, and Shane Larkin all out with injuries or sicknesses.


Boston started the game strong despite not having a true floor general on the court. They were attacking but not reckless, aggressive but not out of control. Their great ball movement led to high percentage shots and an early lead.

Much of the scoring came from Jayson Tatum and Jaylen Brown. Bostons talented young duo played beyond their age, leading the team with eight points apiece going into the second. That being said, everyone got involved in the unselfish mentality on offense.

Khris Middleton had 10 first-quarter points without missing a shot for the Bucks. Milwaukee as a unit was scorching hot from the floor and shot 69% in the quarter. However, the C's took advantage of their five turnovers and held a five-point lead at the end of the opening quarter:

The #Celtics are up 31-26 after 1Q: Boston is led by Jayson Tatum and Jaylen Brown who each have 8 points. The #Bucks got 10 points from Khris Middleton w/the Greek Freak tallying 5 points, 3 rebounds.
— A. Sherrod Blakely (@ASherrodblakely) April 4, 2018

The second-quarter brought a more aggressive Giannis Antetokounmpo, a bad sign for the Celtics. The Greek Freak scored six quick points - all near the rim - to help the Bucks take the lead.

While the ball movement continued for the Celts, the results did not. Despite assisting on 10 of their first 14 field goals, Boston was missing a lot more shots than they were in the first quarter. This was largely due to the lack of transition opportunities - after getting a handful of buckets on the fast break, the second unit couldn't score effectively when relying on half-court sets.

In addition, the Celtics got sloppy with the ball, sparking a 14-2 run for Milwaukee who also continued converting on their looks at the hoop. Despite all this, Greg Monroe and Marcus Morris (who otherwise had a very poor game) kept the train on the tracks with some solid contributions off the bench. To cap off the half, Tatum set a new Celtics rookie record for made three-pointers, and so in style - the Duke alum shot his way into the history books by hitting a buzzer-beating three that made it a one-possession game entering the break:

The two competitors exchanged buckets early in the third quarter, all of which coming from Aron Baynes and Brown for Boston. In fact, up until a minute and a half left, Brown (6 points) and Baynes (4 points) had scored all of the Celtics' baskets in the frame.

An 11-1 spurt by Milwaukee made it a seven-point game with 15 total minutes remaining. Boston couldn't get anything to fall in these 12 minutes. After putting up 31 points in the first and 25 in the second, the C's only managed to post 15 points in the third quarter. Over that time, they only hit six of their 23 shots (24%) from the field and were 1-7 from three, finding themsleves with an eight-point deficit as a result:

Abdel Nader got the scoring going for Brad Stevens' squad in the final frame, scoring their first five points. AL Horford also got into a nice groove, using hit kit of dribble and post moves to create space and knock down a pair of jumpers. Soon after, he converted on this and-one layup to help Boston inch closer to tying the game:

Giannis and Eric Bledsoe did it all for the Bucks, scoring ten straight points for their team (and 10 of their first 15 points of the 4Q). They continued driving and penetrating in the paint, scoring 64% of their points from that area.

Brown and Horford came up big in the final minutes to keep Boston within striking distance, but Giannis and company held on to sink the banged-up Celtics.