Kyrie Irving and Jaylen Brown out again versus OKC Thunder 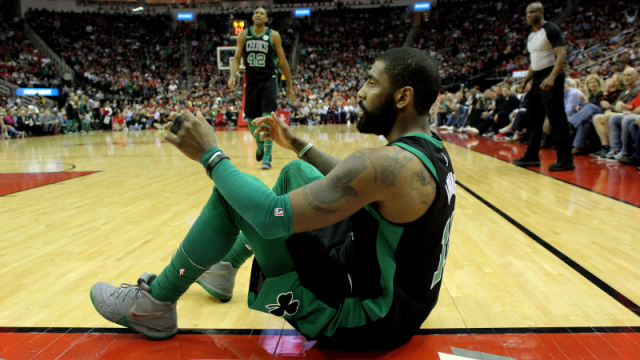 Kyrie Irving and Jaylen Brown have both been ruled out for tonight's game against the Oklahoma City Thunder. It will be Jaylen's fifth straight missed game, and Kyrie's fourth.


Jaylen has been out since March 8th, when he went up for a monster slam against the Minnesota Timberwolves and came down hard and awkwardly on what looked like his spine. It was a scary fall, and fortunately, he was able to walk off of the court without any assistance. Jaylen showed concussion-like symptoms, and has been under the league's concussion protocol ever since.

Boston Celtics forward Jaylen Brown crashed heavily to the floor on to his head after a dunk last night. He was diagnosed with a concussion and is currently under the NBA’s concussion protocol 🤕 pic.twitter.com/1nK0HsSVvn
— InfoPhysiotherapy (@InfoPhysioPT) March 9, 2018


In the following game versus the Indiana Pacers, Kyrie tweaked his knee in the contest's first half. He was on the court for 16 minutes of the game's first 24, and put up 7 points, 4 rebounds, and 1 assist in his time on the floor. He didn't return after halftime, and hasn't played a minute since.

Not much info has been released regarding the extent of Irving's injury, but Brad Stevens assured us that he's slowly progressing.


The Celtics have gone 1-2 in the three complete games that both players have missed, and will surely have to adjust their game plan if these absences continue.

Stevens: “We’re going to have to figure out how to score with Jaylen and Kyrie out.”
— Boston Celtics (@celtics) March 19, 2018


At this point in the season, the Celtics are playing a waiting game. They're in No Man's Land. They have a comfortable six game lead on the Cleveland Cavaliers for the two seed, and are five games behind the Toronto Raptors for the one spot. I think it's fair to say that with twelve games left, they won't catch the Raps, and similarly, are safe from the Cavs.

Feels like a weird time for the Celtics now. With nowhere to really go in the standings, kind of just waiting to get healthy and waiting for the playoffs. But there’s still almost a month of waiting left.
— Adam Himmelsbach (@AdamHimmelsbach) March 19, 2018


So, it's time to rest up and wait for the playoffs to arrive. Let's get healthy and take these playoffs by storm.