Celtics Marcus Smart - a player at the crossroads 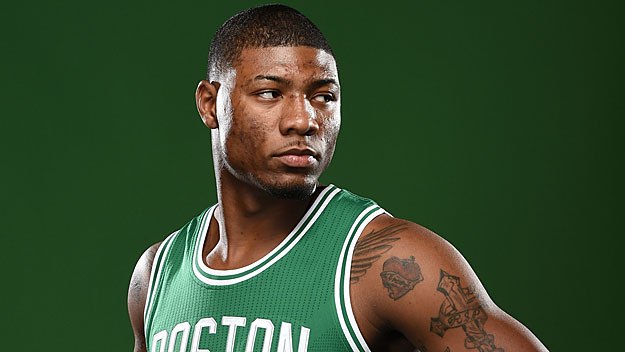 Celtics boss Danny Ainge likes toughness in his players. Despite not having an Arnold Schwarzenegger physique, he was pretty tough on the court and backed down from nobody. In the 2004 NBA draft, Ainge drafted for toughness taking Tony Allen and Delonte West in the first round. Allen is a one-time NBA Champion (2008 with Celtics) and is in his 14th NBA season. He has rightfully earned the reputation as a dogged, tough defender.

West played a number of seasons in the League and was always a time bomb ready to explode. He had a string of behavior problems and was charged with weapons possession, the plural indicating a 9 mm in the waistband, .357 magnum strapped to his leg and, for good measure, a cased shotgun across his back. Watch the video below. It shows how far he had declined by 2016. It also contains information on his alleged involvement with Lebron James' mother.

Marcus Smart had many problems growing up, according to the Boston Globe's Baxter Holmes. He had anger issues, tried to outrun gunfire, mourned the early death of his half-brother from cancer and always seemed to be avoiding the gang warfare in his neighborhood. Some anger issues seem to have resurfaced during his present stint with the Celtics in the form of two wall punchings in the last year, the last one putting him out of action for roughly two weeks.

So the question now is, which path does Marcus follow. Hopefully, it is not the one chosen by Delonte West. That is a sad story. Tony Allen's is not. Tony is a respected veteran of the NBA who may possibly be waived by the Chicago Bulls. A team in the hunt for a Championship would do well to add him to their roster. The video below shows him in action last season. He is wily and he is seasoned.

Figuratively speaking, Danny Ainge has a scale in his office. His player positives go on one side and the negatives on the other. If the scale starts tipping too low on the negative side, the player's stint in Boston is in jeopardy. The trade deadline is six days away, and Terry Rozier has started to play like a reliable PG/SG combo guard. There may be some homer bias here, but I view Smart's present tenure with the Celtics as his best chance to thrive as a player and a well-respected individual. Reports are coming in as I write this that Greg Monroe has agreed to sign with the Celtics. Toughness in the NBA is highly-valued if properly employed, and things are moving fast in Celtics Country.

Allen video via DefenseWinsChampionships
West video via The Fumble