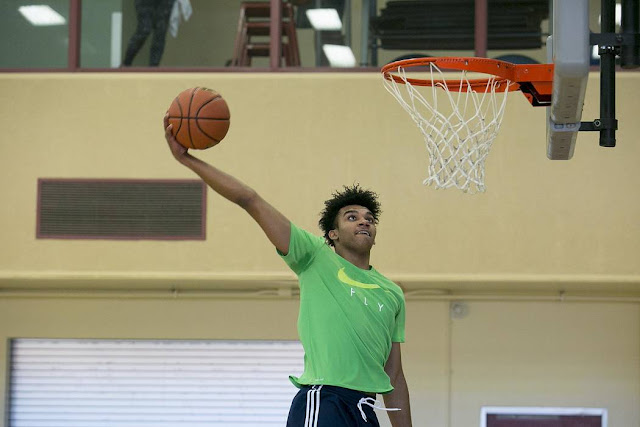 It isn't often that one gets to see a high school basketball game that plays at the level of a Division I college contest. That is what I saw yesterday at the Beach Ball Classic Tournament in Myrtle Beach, SC. Bishop Gorman, Las Vegas, Nevada was pitted against Imhotep Charter out of Philadelphia, Pennsylvania. Imhotep had a 31-1 record last season to Gorman's 22-9 record.

It was a tug-of-war game throughout, and no team held any significant point margin at any point in the game. Every move, shot, pass and rebound was contested by both teams, and the pace was absurd. Imhotep won 53-49.

Bishop Gorman is led by senior wing, Jamal Bey. He is 6'6", 185 pounds and has committed to the University of Washington. He was covered tightly by Imhotep and had trouble getting free. He finished with 13 points, seven rebounds, two assists and two steals. He is a do-everything guy for Gorman, bringing the ball up court, rebounding, scoring and defending. His ball handling and free throw shooting need a bit of work, but, with a solid season at Washington, he could be headed to the pros.

I would like to officially announce that I have committed to University of Washington 💜💛👀 #blessed #UDub pic.twitter.com/jL1uSZwuhb

Montverde Academy (FL) beat Albany (NY) 91-64. Montverde is led by 6'6" senior R. J. Barrett, rated the number one high-schooler in most national polls. He poured in 22 points and added five blocks, three rebounds and two assists. He is headed to Duke University and almost certainly to the NBA. Montverde guard Michael Devoe, heading to Georgia Tech after this season, scored 24 points on perfect shooting from everywhere (10-of-10 FG, 3-of-3 on threes, 1-of-1 FT), adding five rebounds, four assists and four steals.

The tournament ends Saturday evening. I will be writing daily articles on the games, teams and players. The Beach Ball Classic has become one of the most popular high school tournaments in the country. It brings in strong teams from across the nation and gives scouts an early showcasing of potential NBA players. The Boston Celtics may have as many as four first-round draft picks in 2019, and one may come from this tournament.