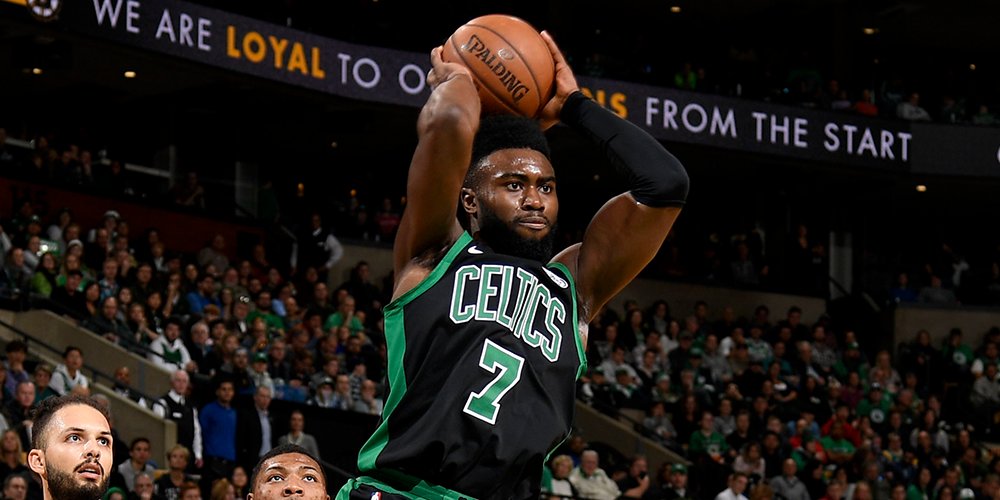 The Boston Celtics are back to their winning ways after defeating the Orlando Magic 118-103 at TD Garden on Friday. A tremendous team effort saw the Celtics running away with the game in the first half and never looking back. Kyrie Irving worked his magic on Orlando with 30 points in 25 minutes before he got some valuable rest in the fourth, and Terry Rozier had a career-high 23 points on 8-11 shooting (5-7 from three).

Boston's offense torched the Magic through the first quarter. Fluid ball movement and efficient shooting saw the Celtics put up their most points in a quarter this season. This offensive surge was led by Al Horford, who continuously made the right play and assisted on seven of Boston's 15 first-quarter field goals. The passing led to great opportunities for Jaylen Brown (10 pts), Jayson Tatum (8 points), and Kyrie (8 points), who shot a combined 10-14 in the quarter. Overall, the team was on fire from the field:

They finished shooting 68% from the floor and 58% from behind the arc after contributions from everyone. The defense held Orlando to 39% shooting, which was enough to create a favorable 14-point separation after the opening 12 minutes:

The C's picked up right where they left off following their strong first quarter. Led by Rozier and Aron Baynes, the Boston bench had a great showing and added further cushioning to the lead. Rozier added seven points in the quarter alone (13 in the half) and shot 3-4 from three.

This gave the starters plenty of momentum to continue their offensive bombardment on the Magic. Irving and Tatum continued scoring on Orlando, while the defense was getting stops over and over again. Irving did all of his first-half work from drives to the hoop and the free-throw line. The Celtics point guard shot 5-5 from the stripe and was maneuvering his way into the paint with ease, just like he did here when he made Evan Fournier dance:

This move was nice, but Boston's success in this half was all about the ball movement. Everyone was playing team-friendly hoops and making the extra passes to lead to open looks. As a result, the Celtics assisted 21 of their 28 first-half baskets and put up 73 points, the most in a half yet this season for Boston, to give Boston a comfortable 26-point lead entering halftime:

Although the Celtics shooting fell back down to (the flat?) earth in the third, Kyrie must not have gotten the memo. He knocked down three of his four shots and netted all five of his free-throws while scoring a silky smooth 13 points in the quarter, including this magical move:

Despite the big lead, the Celtics maintained their hustle and urgency. They had very few mental lapses and continued playing solid defense, limiting the Magic to 22 third-quarter points.

Kyrie was done for the game following the third quarter, yet still had 30 points and his team in a great position entering the final frame:

With a 30-point advantage, Brad Stevens rode his bench all the way home in the fourth. Rozier continued shooting lights-out, as he upped his scoring total to a career-high 23 points on 8-11 shooting.

Mo Speights, the stretch big man off the bench for Orlando, knocked down a trio of three-pointers in a hurry to help close the gap to 20. They got as close as 14 points, but were ultimately held there as Baynes (who finished with a double-double) and the bench finished them off in the closing minutes for a 118-103 victory:

That’s a wrap! The #Celtics defeat the Magic 118-103 to improve to 17-3 on the season. Kyrie Irving led all scorers with 30pts, followed by Terry Rozier with a career-high 23pts (8-for-11 shooting). pic.twitter.com/Dt5kzDI8og

The Celtics will be back in action tomorrow night as they face off against the Indiana Pacers.