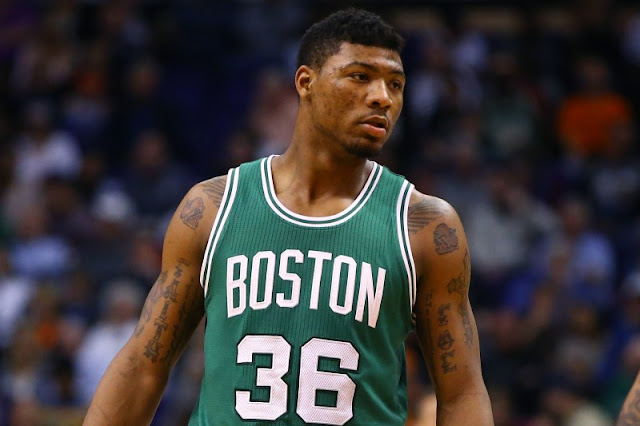 My readers know the respect I have for five-time all-star and 2004 NBA Champion, Chauncey Billups. Well, this past summer, Celts Assistant Coach Jay Larranaga and Marcus Smart met with Billups for several days. Chauncey and Marcus did some on-court workouts, watched film and discussed the game. Here is Jay Larranaga's take on the meeting (per Boston Globe's Adam Himmelsbach):

“I just thought it was a great role model for Marcus. Even their style of play as physical guards that are really good in pick-and-rolls, really good at hitting the open man and just making all their teammates better, it just seemed to make sense.”

Billups and Smart are similar in many ways. Size, build, defensive tenacity, late bloomers, skilled distributors, mediocre shooters early in their careers. Rick Pitino trading CB in his rookie season truly hurt the Celtics', and the rookie's, development. Take a look at the video highlighting 10 plays from Chauncey:

As most of us know now, Smart lost considerable weight over the summer which should help him considerably on both offense and defense. We are hoping that this season he will rise to a new skill level, and I believe that will happen. This is what Jay Larranaga thinks (via Boston Globe's Adam Himmelsbach): 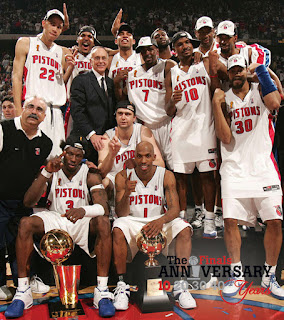 The photo of the 2004 NBA champ Pistons is here for a reason. Two reasons actually. The first is that Chauncey Billups, the leader of the crew, is in the photo. The second reason is that I tend to be an incurable What-If individual. I am thinking of this season.

Rip Hamilton never stopped moving on offense, and Tayshaun Prince was everywhere on defense. Rasheed Wallace averaged 13.0 points, 7.8 rebounds and 1.6 blocks for the series. As an aside, three of the starting five are former Celtics. Billups in his rookie year and Rasheed at the end of his career. Tayshaun had a quick cup of coffee with the Celts after being traded from Memphis, and then was shipped back to the Pistons.

It is a bit of a long shot, but the Celtics are capable of repeating that feat. Anything can happen once a team makes the playoffs. Don't think Marcus and Chauncy didn't talk about that during one of their meetings. Would love to see it happen. Think they have a shot?