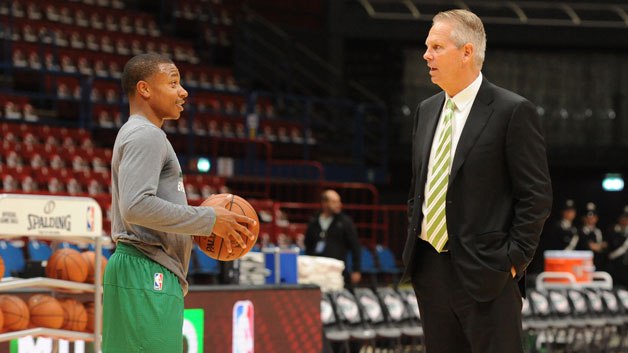 Danny Ainge is human. He doesn't just see players' names on paper and the statistics that are tied with each, he gets to know his players both on and off the court. And that's what makes his job even more difficult than it already is.

When it's time to put personal relationships aside and make the best business decision for the Celtics franchise, Ainge is never afraid to pull the trigger. In 2013, an opportunity presented itself to Boston's front office to send lifetime Celtic Paul Pierce to the Brooklyn Nets. Despite everyone's love for Pierce and the desire to see him retire in green, Ainge wasn't afraid to let that stop him from making the right business decision. Gary Washburn of the Boston Globe noted Danny's relentlessness when it comes to trading beloved players like Pierce and Kevin Garnett:

By the way, it's a damn blessing that Danny was indeed able to put relationships and legacies aside and pull off that steal of a trade.

Knowing this, maybe it's not too surprising that Danny was willing to ship Isaiah Thomas out of town. I don't even need to begin discussing Isaiah's impact on Boston during his time on the Celtics - on the court, off the court, in recruiting, you name it. Isaiah fell in love with Boston, and in return, Boston fell in love with him. However, like the Pierce and KG trade, another opportunity was presented to Danny and although he knew it would be difficult to make, it had to be done.

We've already heard Isaiah open up about his phone call with Danny in his Players' Tribune statement. Now, Ainge has opened up about how the phone call to IT telling him that he was traded was the toughest call he's ever had to make:

“It was definitely the toughest call I ever had to make,” Ainge said. “It’s in everybody’s best interest that I don’t share all the reasons [for the trade]. But the bottom line is obviously I felt like it was the right thing for our franchise to do. But it’s a deep and complicated process. It’s not as simple as people think it is.

He went on to talk about how becoming friends with these guys make the business end of the NBA so much more difficult:

“It’s not easy for these office people that become great friends with the players. There’s a reality that I see and that’s what makes any sort of trade challenging. But it’s just part of the world that we live in, but it’s got to be done. You’ve got to do what’s best for the franchise. The franchise is bigger than all of us. Bigger than one individual.”

I think that the last part of Danny's quote is critical here: "The franchise is bigger than all of us. Bigger than one individual." Ironically, the Celtics are trading many assets for one individual. But still, his point here is that people falling in love with one player doesn't justify denying other opportunities that may present themselves.

It's impressive how a player who has been in Boston for only two and a half years could leave that big of an impact on not just the city and not just the fans, but even the management. Danny has traded handfuls of players during his 14 years with the Celtics, including that Pierce trade. Yet, a player who suited up for only 179 total games in clover green was the toughest player for Danny to call after he had traded him. This just goes to show the type of person Isaiah is.

In a way, it makes sense. Danny traded for Isaiah in 2015, investing himself in the little guy. He supplied him with an opportunity to significantly advance his game, become an All-Star, and be the face of a franchise. These all only made the phone call more emotional.

He may be known for his cold willingness to trade, cut, or part ways with any player at any time, but even Dealer Danny is human and his phone call to Isaiah after the trade was the hardest call he's ever had to make.