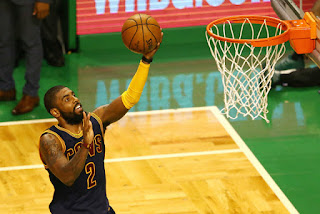 Could the Boston Celtics and Cleveland Cavaliers go from Eastern Conference rivals ... to trade partners? According to ESPN's Adrian Wojnarowski, it's on the table.

In a story on the Cavaliers' trade talks involving Kyrie Irving, Woj reported that the Celtics have "expressed interest" in Irving, although they haven't made an offer for the All-Star point guard. Irving, 25, asked the Cavaliers for a trade last month and reportedly has the Celtics on his wish list.

The Cavaliers, meanwhile, are stuck between a rock and a hard place. One would expect them to look for short-term assets in return for Irving to surround LeBron James in pursuit of another championship. However, without any guarantee that James, a free agent after this season, will stick around, the team has begun to focus on younger stars in return, potentially including Jayson Tatum.

Here's what Woj had to say on the Celtics' potential package for Irving:

Boston has expressed interest in Irving and could offer the best combination of short-term (Isaiah Thomas and Jae Crowder) and long-term (Jaylen Brown, Tatum, picks) assets. The Celtics have made no formal offer, and it is against Boston's front-office DNA to push out front with the most generous offer. Boston knows that Cleveland is mostly intrigued with Tatum, but the sides have not formally discussed that deal, league sources said.

We've been hearing for a few years now that the Celtics can offer the best combination of assets for any star (the story doesn't even mention the 2018 picks the Celtics possess), but Danny Ainge has thus far been reluctant to cash in. Woj adds that teams expect the Cavaliers to more aggressively shop Irving next month, so Ainge could be playing the waiting game.

Whether Irving is the player to cash in on is debatable. The team would almost certainly have to deal Isaiah Thomas in any potential deal, thus making Tatum unlikely to be part of a package for the 25-year-old. It's already clear that Thomas fits into Brad Stevens' system and he helped recruit the other two biggest stars. Irving though would be under contract for one more season than Thomas.

Our Christian Robinson made the argument that Thomas is better than Irving, particularly for the Celtics. Irving's otherworldly offense talent is undeniable, but his hero-ball tendencies and lack of effort on defense are hard to overlook as well.

And that's before you factor in questions of whether the Celtics and Cavaliers would even want to trade with each other in the first place. These teams are rivals. They're each among the favorites to compete for the Eastern Conference this year and beyond. And a swap of point guards wouldn't just be risky on both sides, it would be unprecedented among chief competitors.

The C's are likely best off letting Irving go elsewhere. While they have the assets to acquire him, he may not be a great fit for their system and watching the Cavs take a lesser return elsewhere elevates the Celtics to favorite in the East.