Semi Ojeleye- a gem found in the second round? 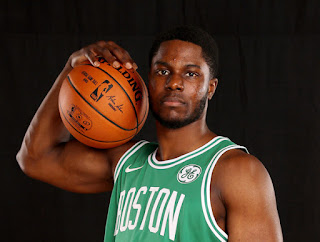 The first thing you notice about Semi Ojeleye is his chiseled physique. At 6'7" and a solid 235 pounds, he will almost certainly end up as a wing in the Celts system. But he also has the size and strength to match up against other teams' bigs. In other words, this guy is versatile. And Brad Stevens likes what he sees in Semi's game.

Ojeleye was chosen 37th overall in the second round of the 2017 NBA draft. He was originally rated at 20th on DraftExpress' list. He has maturity, agility, athleticism and a substantial two-way game. It looks like he can contribute right away.

The video below puts his shooting skills on display. Against the Los Angeles Lakers Summer League team, he scored 19 points, shooting 46% from the field and 56% from the three-point line. Semi can hit from distance and finish at the rim. He is a three-and-D player with muscle and quickness.

Danny Ainge knows that quality NBA players can be found in the second round of the NBA draft partly because he was one. Both Ainge and his back court mate from the mid-80's, Dennis Johnson, fell out of the first round. DeAndre Jordan, Manu Ginobli, Marc Gasol, Paul Millsap and Draymond Green were all picked from the second round. Ojeleye has a shot at joining that group.

Celtics coach Brad Stevens made an appearance at the Basketball Hall of Fame's 60 Days of Summer program. He indicated that he had followed Semi's progress over the past few years, and according to Mass.Live's Tom Westerholm, Brad is very optimistic about Ojeleye's potential:


Ojeleye is a prototypical player Stevens would like -- a useful offensive weapon who can stretch the floor to the 3-point line while also defending several different positions. Most notably, Ojeleye utilized his strength to defend Los Angeles Lakers center Ivica Zubac down the stretch in a game the Celtics won -- prompting Stevens to say Ojeleye's versatility could be "enormous" for the Celtics this season.

Semi Ojeleye may just be a second-round gem that needs polishing. There is no coach more capable of accomplishing that than Brad Stevens. One thing is for sure. This kid can play!