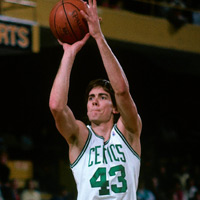 Henry, who joined the Celts on a pair of 10-day contracts he managed to parlay into a rest-of-season deal way back in 1987, played his college ball with UC Santa Barbara before being drafted by the Houston Rockets late in the 1986 NBA Draft. The guy didn't even make it a whole season with the team, being waived just two days before Christmas 1986, only to be snatched up by the Celtics on New Year's Day.


@bradfo @brohrbach everyone takes a back seat to the best Celtics benchwarmer of them all. Connor Henry.
— Ian Browne (@IanMBrowne) January 8, 2014


Young Connor was as unremarkable as any guy signed off of 10-day deals, logging just 2.9 points, .8 boards and .8 assists per game in the 46 contests he played in for the club in the 1986-87 and 1987-88 seasons. He was waived shortly after the start of the 1987-88 season, and picked up by the Milwaukee Bucks, then Sacramento Kings, for 14 and 15 game stints. Henry had the dubious experience of being a player drafted out of the league as well as in, after being selected by the Miami Heat from the Kings in the 1988 NBA Expansion Draft.

Henry never did play for the Heat, instead playing in the CBA and overseas until retiring as a player in 1998. He'd continue coaching, though, eventually landing a gig with the Fort Wayne Mad Ants in the NBA D-League, where he'd win D-League Coach of the Year in 2014 before joining the Orlando Magic as an assistant coach, his current job. You can read more about Henry here, in tb727's longform "What the hell happened to..." series.