Jeremy Lin says the Nets are playoff-bound; is the East really that bad? 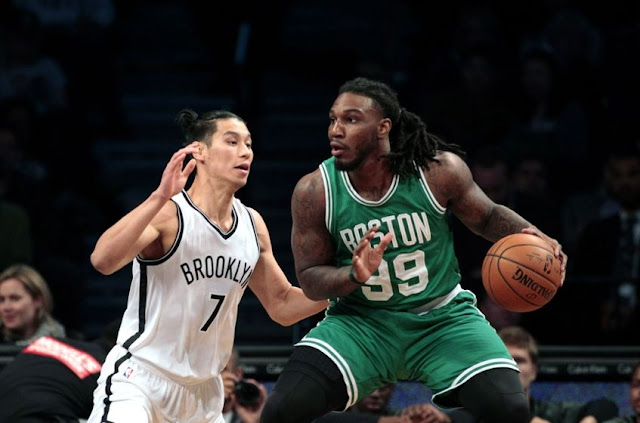 Jeremy Lin thinks the Brooklyn Nets will make the playoffs next season.


"We're making the playoffs. I don't care what anybody else says to me." - Brooklyn Nets' Jeremy Lin


The first time I saw those words, I smirked. I couldn't help myself. It's become something of a ritual among Boston Celtics fans. We watch the management team throw some more tires on the fire, and the blaze gets taller while Celtics fans get to enjoy all of the warmth and none of the shame.


I'm not saying Lin is right, mind you. Not right at this moment, anyhow. But the Nets have been pretty smart with the moves they have made - so much so it's out of character - and given the right course of events, the actually might be able to make the playoffs. Now I know what you're thinking, but hear me out - this is not the Billy King Nets we're talking about. They have a great coach in Kenny Atkinson, who runs a modern pace-and-space system not that different from Boston's, and an even better GM in Sean Marks, a veteran of the San Antonio Spurs front office. These people are good at what they do.


Front offices do not play basketball, however, the roster does, and to Lin's credit, it's moving in the right direction. It is not, however, a playoff team - yet. What I mean by this is the team has done an admirable job morphing from "whatever we could get for whatever we had" to something vaguely resembling a modern NBA team. They have (wisely) cycled through a lot of players to find a few players worth trying to develop, and used their cap space and existing talent to transform the team into something like a 30 to 35 win team.

This doesn't sound too impressive, but keep in mind they only won 20 games last season, and adding a likely ten games is a very big step indeed. Not every team rebuilding is going to jump 15 games forward in the win column like Brad Stevens' Celts did a few years ago. This is because, while losing Brook Lopez to get some picks was painful, the return moves like that trade and taking on DeMarre Carroll's bad contract should help a LOT, if sniffing the postseason is the goal.


D'Angelo Russell, part of the Lopez haul, is a good point guard now who might be great if he can get out of his own way. He's a solid distributor, can space the floor, and is big enough to play either guard role, much like Lin, who actually played the two as his main position with the Charlotte Hornets. They have a bevvy of positionally-fluid players who can play between the two and three (Sean Kilpatrick, Caris LeVert) or three and four (Carroll, Rondae Hollis-Jefferson).

They have athletic bigs who can rebound (Hollis-Jefferson, Trevor Booker) and stretch the floor a bit (Carroll, Booker). They even have an old-school back-to-the-basket big to bang with should a team try to go that route with them (Timofei Mozgov may be overpaid, but he is still useful in this sense). And they have young guards like Joe Harris, Spencer Dinwiddie and Archie Goodwin who have grown since joining the team and might stick in this league.


That's not enough to get to the playoffs, however. They still need shooting, and they need a more modern, athletic (and preferably shooting) big with either fast enough feet to help near the perimeter, or with the timing or explosiveness to be a solid rim protector. If they could find a way to use their remaining cap space - around $13 million - to sign a player like Nikola Mirotic, JaMychal Green or Alex Len, they could push their win total to the 38-42 win range, which might be just enough to sneak into the weakened (and already weak) Eastern Conference.

Think about it. The east has seen an exodus of talent to the Western Conference, leaving only Boston and the Cleveland Cavaliers as potential contenders, and the argument could be made only the Washington Wizards, Milwaukee Bucks, and Toronto Raptors would have a prayer at making the playoffs in the West. The remaining three slots in the Eastern Playoff picture are much murkier, however.


.@basketballtalk says he likes Dwight Howard gamble and #Hornets are in good shape as East weakens around them.


When the Charlotte Hornets landed Dwight Howard, they probably made themselves strong enough to solidify the sixth seed, but never underestimate D12's skill for hastening the demise of a team simply by joining it. The Miami Heat ended the season among the league's best teams, adding Kelly Olynyk and losing little. But don't forget they also spent half the season as one of the league's worst teams and are bringing back much the same roster - see what I did there? We may love Kelly, but know adding one of the league's most frustratingly inconsistent players to one of the league's most inconsistent rosters might be a good idea, but possibly only for consistency's sake.

The Atlanta Hawks and Indiana Pacers' reluctance to rebuild brought one on them anyway, but with less tools than might have been had, one through stupidity, the other through extreme stupidity - I'll let you guess which is which. In both cases, they have one player who might have All-Star potential (several years in the future), a solid but overpaid starter, and a junk drawer of contracts that don't make sense.


You could throw the New York Knicks in this category if they trade Carmelo Anthony (they will), and the Detroit Pistons too - though whether that All-Star might be Avery Bradley or Andre Drummond remains to be seen, as does whether Stan Van Gundy can navigate the cap nightmare he created. The Orlando Magic would be there as well, except they have been managed so poorly they likely don't even have a potential All-Star on their roster unless it's Jonathon Isaac years from now. None of those teams deserves to get in the playoffs. Only the Pistons and arguably the Knicks have the talent, and even that's assuming Melo stays.

There's one team in the East left I have not mentioned, and for good reason. The biggest threat to Mr. Lin's prediction is the Philadelphia 76ers - and the biggest ally they have, as well. Confused? Don't be - the 76ers are the most fragile team in the league next season, with much of their roster having missed significant time (or seasons!) in recent years. With additions of veterans like JJ Redick and Amir Johnson, they should make the playoffs if healthy.

Emphasis on "if healthy".


So, in light of all these obstacles, I'm going to have to say Jeremy Lin is not talking crazy talk. I still have to say the dominoes falling just-so to create the scenario where the Nets squeak in to the eighth seed is unlikely, but not impossible.  In my estimation, the path to the Nets making the playoffs requires one or more 76ers starters missing significant time, needs Melo to be traded, and at least two of Atlanta, Indiana, and Orlando to embrace tanking. All three teams own their own pick, and should, though may not.

Now, all this having been said, the crazy thing is, even if everything breaks their way and they do make the playoffs, they will still be in the running for a low lottery pick. Only Orlando looks like a serious threat to be worse in the East on paper right now, but Atlanta and Indiana should be sub-40 win teams, and possibly Detroit and Philly too.

The West has only the Phoenix Suns and Dallas Mavericks looking like locks for sub-40 wins, but the Sacramento Kings, Los Angeles Lakers, Los Angeles Clippers and New Orleans Pelicans could join them if the vets they added do not work out. If the Memphis Grizzlies do not retain JaMychal Green and Tony Allen, they could, too. All these teams have better odds of winning more games than the worst team in the East, though, save maybe Phoenix and Dallas. Realistically speaking, the Nets could make the playoffs and have the league's sixth- or seventh- worst record, given the bar to get into the East's race will probably be getting to 40 wins, and Atlanta, Indiana, Orlando, Philly, and Brooklyn will all have to fight to get there, arguably also New York and Detroit, too.


I keep reading that some fans object to @jlin7 comments about Nets making playoffs. What's he supposed to say? "Looks like more losing!"
— NetsDaily.com (@NetsDaily) July 17, 2017


It's too early to take statements like Lin's with much more than a mountain of salt, as numerous teams are still in the hunt for a number of free agents who might reasonably impact their playoff aspirations next season, but if anything is certain for next season, the East is both weak and fluid enough that such a statement - one we have been conditioned to sneer at over the last four years - is not any less sound than expecting the Nets to gift us another high lottery pick.