Danny Ainge: There could be "significant change" to the Celtics this summer 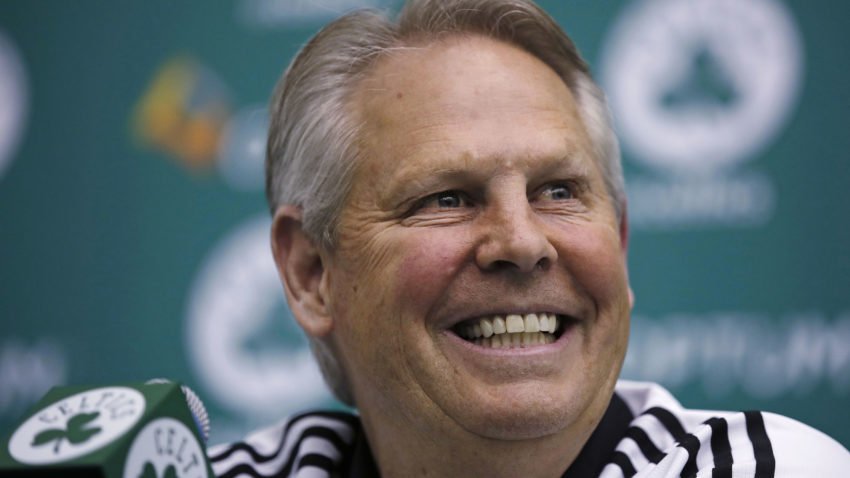 Danny Ainge is as patient as they come. With overflowing assets in his possession this season, he held his ground at the Trade Deadline and refused to make a deal just for the sake of making a deal, much at the frustration of Celtics fans. His patience paid dividends when Boston won the lottery and was rewarded the No. 1 pick in the 2017 NBA Draft, but even Ainge understands that significant moves may be essential to compete with the leagues' best.

The C's general manager told the Boston Herald's Steve Bulpett about his thoughts on where his team is at:

“I feel like wins are deceiving sometimes. I think that the fact that we were one of three teams still left playing was something to be proud of, but it’s not necessarily where we really are.

“I think sometimes teams make false assumptions of their team based on things like that. I think that our team is not that much different than a lot of our competition in the East. I think we had a good year in spite of some injuries, you know, with [Al] Horford going down early and Isaiah [Thomas] missing a short time and Avery [Bradley] missing 22 games there in a stretch. We had to overcome some injuries, and it was good because our depth got a chance to play. Everybody on our roster got a chance to prove their worth.

“But I feel like it doesn’t really matter what we’ve accomplished. If we’d lost Game 7 against the Wizards, I don’t feel any different than if we’re where we are today. I know that we’re good. I know that we’re not great. I know that we still have more to do, and, you know, that next step is by far the hardest.”

Harsh, but fair. I for one was proud of the Celts for making it to the Eastern Conference Finals since it showed progress and gave the young guys some experience with playoff success. While Ainge surely still feels this way, it's good to know that he isn't satisfied in the least with a trip to the Eastern Conference Finals. This is the City of Champions, and he understands that it may take another superstar or two to get to that level:

“We have a lot of good players,” he said, “but we need some great ones.”

Yeah, this seems pretty obvious and straightforward. But fans who criticize Ainge for not being aggressive enough in the past must remember - it ain't as easy as it seems. It's extremely difficult to make a big deal while not overpaying or jeopardizing the future. Sometimes the best move is no move at all. Danny further addressed this with Bulpett:

“Just because you’re one piece away doesn’t mean you can get it. And if you force yourself to get it, and if you force a deal or force yourself to get the second best available or the third or fourth best available player at that position that you need, then it might not make you that much better or make you still not good enough, and you’re stuck. So, yeah, we’re not that far away, but we’re still a ways away. We still know we need to get better. Everybody in our organization knows we need to get better. We need to add.”

So how will they add? With the draft, so many picks and assets, and free agency coming up, there's a lot of different routes that could be taken. As you would guess, that route is unpaved right now and will depend on what opportunities best present themselves:

“...there is a potential for there to be some significant change,” said Ainge. “But maybe less change. Maybe more change; maybe not. A lot will be dependent on what we’re able to pull off in the draft and in deals leading up to free agency and then what happens in free agency. There’s just so much unknown right now. Right now it’s all talk and pipe dreams and planning. But there’s no certainty. It’s an exciting time for us, and it’s a very busy time for us.”

What does this mean for the future? I don't know. I'm actually pretty torn on the matter. I am psyched about the No. 1 pick (AKA Markelle Fultz) and Boston's long-term future in general. At the same time though, I wouldn't mind cashing in on our assets now and putting together a stacked lineup. I think I prefer the former, mostly because there isn't as much risk involved and LeBron James is still playing like a 26-year-old.

Based on the past couple of seasons, it seemed like Ainge was in it for the long haul. However, based on this interview, it sounds like Ainge would now prefer to be a top competitor as soon as possible. What's your take?