Adding injury to insult, IT's hip may keep him out duration of series 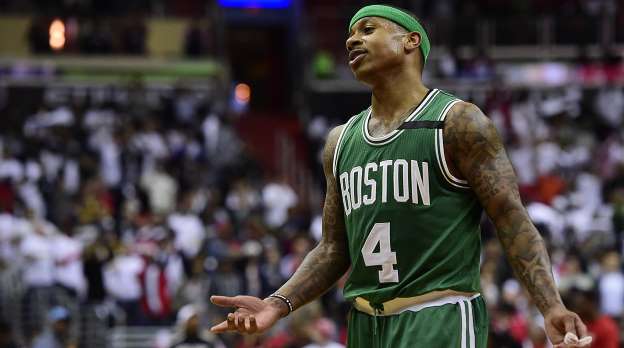 As if last night's drubbing was not enough.


Isaiah Thomas, who has evidently been playing since Game Six of the Washington Wizards-Boston Celtics series with a strained hip, aggravated it considerably in the blowout at the Garden, Boston's largest loss ever in an Eastern Conference Finals. It's my job to tell you how amazing he was this season (he was) and how much further this squad went (it did) and how much more they achieved than expected (I am)...but this SUCKS.

I would be expected to say this, but for the last few games, it really seemed to me he didn't have his typical attacking approach to the game, though I didn't think much of it, assuming much if not all was coming from the double- and triple- coverage he was being subjected to, and the rest was just exhaustion - from the grind of the postseason, from repeat dental surgeries, from losing his sister, and from (ostensibly) grown-ass men shoving the dude because they couldn't find legitimate ways to keep him from scoring.

Turns out, the little guy is hurting, and not just from losing.


Isaiah Thomas could miss the rest of the playoffs with right hip injury. Team doctors have described the injury as 'serious'. #Celtics pic.twitter.com/6EmZJ4LMp8
— The Fuzz (@TheFuzzNBA) May 20, 2017


The hip injury is a massive loss for basketball fans everywhere should it keep him off the court for Game Three, and with early reports suggesting it is a significant injury to be re-evaluated today, it doesn't sound hopeful, at least for Sunday - quite likely 50% of the remainder of Boston's season. It also means there's very little chance this series will have many (if any) competitive quarters left in it, never mind games, and while we all knew this could end up being the case, it doesn't make the postseason any more fun to watch.

For that, we are all impoverished, and while I enjoy watching dominance in the sport, when the two best players of the teams standing in the way of this year's behemoths find themselves on the injured list, it makes the feeling of inevitability go from vague to dull. Better officiating, rules changes, more rest - there's ways to improve the product, and while I won't cry foul given Boston has been as much a culprit as victim to some of these forces, the need for changes should be evident given what we are seeing this postseason.

For those of you ready to proclaim doom and gloom about the Celtics' future less than a week removed from the ebullience we rightfully felt after earning an ECF matchup with this century's greatest player and quite possibly team, take a whole row of seats. This team won 53 games in the regular season, with victories over almost every top ten team in the league, some of them multiple wins. In what should be a rebuilding year. With a core mostly planned to be temporary or developing, not fringe contender. It won the lottery, with as many as three potential lottery picks in addition to all its own in an era where draft picks may be the most important teambuilding tool there is. And made it to the ECF, by the way, with an injured star just recovered from surgery on his face after a tragic death in his family. Who made Second Team All-NBA, and was a serious contender for MVP before his game dipped a bit in the last weeks of the season.


"It's a blessing," Isaiah Thomas says of being named to All-NBA Second Team. "It's not just something for me. It's something for this team."
— Boston Celtics (@celtics) May 18, 2017


If you are unable to see how amazing all of this is and consider yourself a Boston fan, I suggest you quit and follow some other team - maybe the New York Knicks? They seem like the right kind of clueless for that sort of perspective to mesh well with. And if you are NOT a Boston fan, but still want to dump on this team, you're just being ignorant. There's plenty to hate about Boston as a fan of another team- the obnoxious behavior of a (vocal) minority of fans, spoiled by the disproportional number of titles won across several sports, flavored with very real and disgraceful racial epithets we all should be ashamed of (instead of denying). There's the recent success of the Celts, much of it built on Danny Ainge robbing other team's assets due to the lack of awareness (I suppose) of what they had in their hands, or what they were getting, which (rightfully) seems unfair, though hardly Ainge's fault.

It's OK hate obnoxiousness, the greatness of other teams (lord knows I was last night), and bad- to- moronic moves by other front offices and the rules which reward incompetence in the NBA. And it's admirable to hate racist behavior (pro tip: if you hear about such behavior, denounce - not deny - it) and resent the way this city has treated its own players in the past, but if you missed the human story present in all of this, well, I feel bad for you. This season may not be over yet, technically, but believe me when I tell you that it has been everything we could have hoped for and more, and what remains is just to enjoy. So enjoy whatever fearless play we get to see from the likes of Jaylen Brown and Terry Rozier, and if Isaiah can't return to the floor, let me be the first to say THANK YOU, for everything this season. I see what you (all) did, and I am not alone.