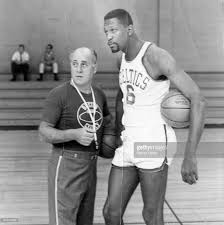 Part 1 of "Player-coach Russell gets the last laugh" is available here.


Bill Russell wasn’t always the easiest guy to work with. Long before The Iverson preached his sermon on practice, Russell lived it. Though (unlike Wilt) he would show up regularly, his routine was to stroll into the gym, a cup of tea in one hand, a couple of newspapers in the other, and basically “chill” – maybe do a little shooting. Exertion was reserved for the genuine competition. 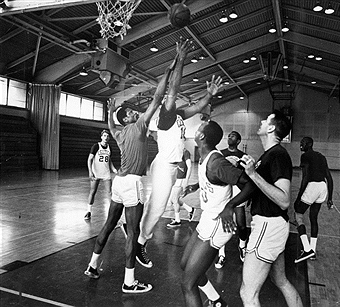 Coach Auerbach would tell of once coaxing a reluctant Russell onto the practice floor. A miffed Bill so dominated the scrimmage that a frustrated Red sat him down almost immediately, fearful for the confidence of the other players.

After reflecting on the opportunity to coach the team, Russell, who always viewed himself as more than just a ballplayer, was intrigued – and certainly tempted by the 25 percent increase in pay it offered. He’d long been a student of the game – he and KC Jones had been devising defensive strategies back in their USF dorm room.

[On a side note, wouldn’t it have created an interesting narrative if Red had chosen KC rather than Red to become player-coach? History suggests that Jones was plenty qualified in the basketball sense as well as by temperament. Hmmm!!]

Bill decided he’d like to give it a try – and Red’s list of candidates whittled itself down to one. The announcement was made the day after the Lakers upset the C’s at the Garden in Game 1 of the ’66 Finals.


The Celtics do not deserve to win the playoffs for the ninth year in succession because in cold-blooded premeditation they handicapped themselves by making Russell, their meal ticket, handle two big jobs. The Celtics undoubtedly would have won Sunday’s game if Auerbach had been coaching them.

After establishing an early double-digit cushion and three-point halftime lead, the Celtics found themselves playing from behind throughout the second half of Game 2 of the Eastern Division Final on that Sunday. Down by 14 mid-fourth quarter, Coach Russell subbed in Larry Siegfried and rookie Jim Barnett for a cold-shooting Sam Jones and foul-plagued Bailey Howell. Inexplicably, the Tiny Tots sparked a rally that cut the deficit to a single point.

The entire Garden, from pillar to post, was expecting Russ to re-insert his starters for the decisive possessions. Whether it was a hunch, an oversight, or whatever, Russell kept dancin’ with the ones that brung him (back) … and the gamble didn’t pay off.

Hannum used a time-out to steady his troops enough to eke out a 107-102 victory and take a non-refundable 2-0 series lead.

Doubt regarding Russell as coach lingered long after the 76ers’ champagne had dried … doubts that any player, particularly a star, could fill both roles in that “modern,” bi-coastal league. Slater Martin had asked out of coaching Kerner’s Hawks in favor of Hannum primarily because his focus on “playing” was distracting him from coaching duties and responsibilities. Even Sam Jones wondered whether it was time to abandon the experiment.

Russell himself acknowledged some difficulty with the detail work, like some erratic substitution.

Some sports journalist a year or so ago quipped, “Steph Curry doesn’t go into a ‘zone,’ he wakes up.” The greatest players, like Russell, have that attribute where they see the play before it happens. They’re so “in” the moment, they’re ahead of the moment. 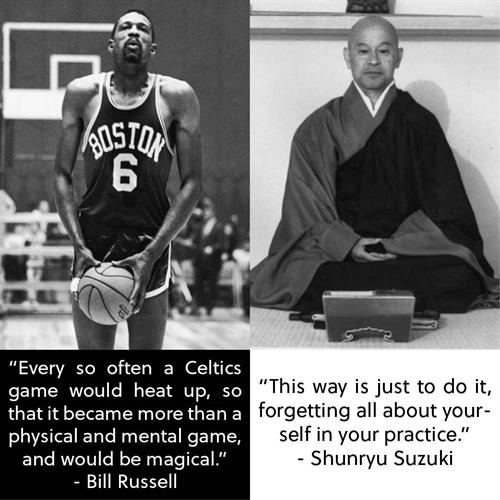 That so-called “zone” is an odd and enigmatic entity – a genuine oxymoron, you might say. A state of ultra-sensitive awareness that goes away as soon as your mind becomes aware of its presence. It’s the very antithesis of game-coaching, which is an attempt to dissect the action in all its complexity and nuance.

At his 2015 Hall of Fame induction, Coach Heinsohn told an Auerbach story. During time-outs at crucial junctures, Red’s words of wisdom to the troops often consisted of “Anybody got anything?” Tommy presented this apparent bumbling as a stroke of genius on Red’s part, since he had created a culture in which players expected not only to be so challenged, but to provide a useful response.

As a rookie coach, Russ felt the need to establish his leadership and authority over a group of peers. He told the team as much at their break-up dinner in 1966 while adopting Red’s practice of not socializing with the players or their families. Also Bill, who’d been Auerbach’s captain ever since Cousy retired, chose not to appoint a successor in that role until naming John Havlicek at mid-season. During an interview earlier this year, the rookie Jim Barnett – better known currently as the long-time analyst for local Golden State Warrior TV broadcasts – reminisced about a Coach Russell pre-game talk in the midst of an extended road trip. JB claims it took Russ three tries to correctly identify their opponent for the evening.

Despite all the growing pains, Boston notched 62 regular-season wins, including five of nine from Philadelphia.

Yet, for the first time in nine years, a defeated Bill Russell faced a summer of soul-searching.


Swing by tomorrow for, as Mr. Harvey used to call it, "The Rest of the Story"!


Russell/Barnett image: Getty
Russell quote/image: sensebasketball.com
Quotes and background: The Rivalry, by John Taylor
Background: Red Auerbach: On and Off the Court, by Red Auerbach and Joe Fitzgerald