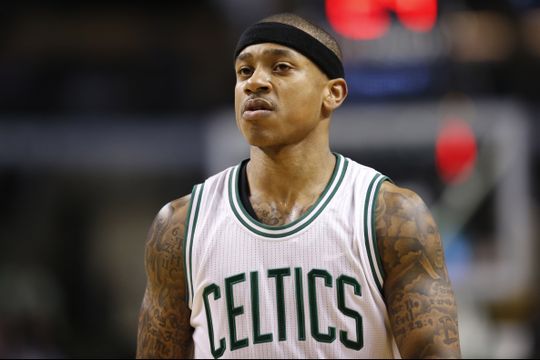 It was a big night for the Boston Celtics on Monday. The fuse started with a win over the lowly Brooklyn Nets, securing the Celtics their first division title since 2012.


This has been a year of firsts for the Celtics and Isaiah Thomas, who has spent most of his career on middling teams, seems excited about the accolades his squad is racking up:


#Celtics Isaiah Thomas on winning division, earning 1st in East: l've never won one. All the things we're doing this year mean a lot to me.
— Scott Souza (@Scott_Souza) April 11, 2017


But Brad Stevens, who is also going through all of these firsts, has his sights set higher:


Brad Stevens on winning the Atlantic Division: "It’s not something we’ve talked about. I guess in Boston you only talk about one goal."
— Boston Celtics (@celtics) April 11, 2017


That "goal" is presumably a championship, which is closer than ever now for Brad, as his team pulled into the lead for the one seed in the Eastern conference on Monday night. That came at the expense of the Cleveland Cavaliers, who dropped their third straight in a loss to the Miami Heat. But now, the C's have a chance to secure the one seed with a win against the Milwaukee Bucks on Wednesday.

Last time the Bucks and the Celtics went head-to-head, it was a fist fight. Milwaukee came away with a three-point-win on the backs of Giannis Antetokounmpo and rookie Malcolm Brogdon. It's not a fun matchup for the C's considering Giannis is almost impossible to guard and a nightmare as an assignment. The "Greek Freak" has been a monster lately, and his Bucks have a shot at moving up to the five seed with a win against the Celtics on Wednesday... as long as the Atlanta Hawks lose on Tuesday.

Don't you love the final stretch?


And if the Hawks win tomorrow night, the Bucks will be locked in at 6th & have nothing to play for Wednesday vs Celtics (fire emojis).
— CelticsLife.com (@CelticsLife) April 11, 2017


The Hawks are going up against the Charlotte Hornets, who are already out of the playoffs. Whether that means they'll just roll over remains to be seen, but if the Hawks can squeeze out a win, then the Bucks don't have anything riding on Wednesday's game in the TD Garden.

If the Celtics can defend home court and stop Giannis and the Bucks on the final night of the regular season, they likely won't see Milwaukee at all in the playoffs. Considering the matchup, that's a dream come true for the C's who probably don't want to go into a best-of-seven series against Jason Kidd's young lineup. Instead, by winning Boston will probably be slated against the wildly inconsistent Chicago Bulls, the Miami Heat, or the Indiana Pacers. All of which are better matchups than the Bucks.

So, root for the Hawks on Tuesday night, because it might make your Wednesday a little bit less stressful.

You can also listen to Mark Allison and I break down this end of the season excitement on this weeks CelticsLife podcast: