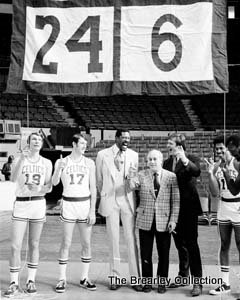 
Though the guest of honor demanded that the actual elevation itself occur behind closed doors, No. 6 was honorably raised to the rafters of Walter Brown’s Boston Garden on this date 45 years ago.

Not quite 1,000 days had passed since William Felton Russell had tipped the balance of the National Basketball Association by announcing his retirement from the Celtics in a thoughtful, first-person essay published in Sports Illustrated during the summer of 1969.

In the interim, the gregarious Russ and that cackle of his that he calls a laugh had gone on to land an NBA analyst’s gig for ABC’s national broadcasts … and the Celtics had yet to participate in another post-season game.

But by March of 1972, GM Red Auerbach and Coach Tom Heinsohn had blended a new and emerging version of Celtic passion and pride into a top contender. Little wonder, then, that a Sunday afternoon match-up of ‘70’s Celtic tradition and Big Apple star-power would invite network coverage … and that’s indeed what it took to elicit a Bill Russell return to Boston after he’d stopped playing.

And thus that’s what it took to hang No. 6 from the roof.

The adornment of the Garden’s rafters in the early ‘70’s was a study in contrasts. On one side of the overhead scoreboard were the C’s 11 championship banners along with one more plain green-and-white one sporting the jersey numbers of seven players and a commemorative No. 1 for the team’s founder, savior and guiding light. On the other side was black-and-gold paraphernalia recognizing a bevy of Bruin accomplishment and individual banners for some old-timers like Eddie Shore.

The banners never came down, whether the Bruins or Celtics were playing, Bruno was battling George Steele (RIP), or Steve Tyler and Aerosmith were rockin’ – the older ones were showing a tinge of cigarette smoke. (Though prohibited in the arena itself, smoking was still allowed in the lobby and a fair bit would “seep” in after halftime.) 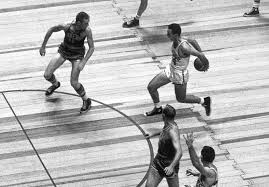 The Celtic organization began its tradition of Digital Discontinuation on Opening Night of the 1963-64 season – perhaps induced by the Garden’s sentimental “We Luv Ya, Cooz!” tone during the prior St. Patty’s Day nod to the Houdini of the Hardwood. “Easy Ed” Macauley joined Bob Cousy as the original Rafter Royalty. By the time Russell began coaching, Mr. Brown, Ramsey, Sharman and Heinie had joined the ranks, with the Jones boys soon to follow.

The NBA’s rapid expansion in the late ‘60’s – abetted by the emergence of the rival ABA – juiced up player movement in pro hoops, and key vets like Emmette Bryant, Bailey Howell, Wayne Embry, even five-time champ Larry Seigfried ended their playing days in another team’s gear. Steady Satch Sanders, Captain John Havlicek and the wily Don Nelson, who were kept on board to help nurture the next generation, would witness the timely rise of Nos. 16, 17 and 19.

While Bill Russell was as proud to be a Celtic as Auerbach himself, his associations with the climate and ultra-parochial culture of the Commonwealth of Massachusetts were hardly so seamless.

The history and impact of the Celtic organization is rife with improbability. It’s not just that such a paragon of diversity and true meritocracy was happening in a city notorious – reputation for “liberalism” notwithstanding – for its strict enforcement of racial and ethnic boundaries. Walter Brown, the product of an oft-snooty “Proper Bostonian” upbringing, had the knack for connecting with everyone from Average Joes to Presidents … yet Brown was more a born-and-bred hockey than hoops fan.

Perhaps accelerated by all the winning (and whether intentional or not), Brown and Auerbach were driving social change, and their black ballplayers were on the front lines, suffering occasional collateral damage. Big Bill was still coping with the scars of that damage on that long ago Sunday afternoon.

Not that he was apt to assign it to a Hank Finkel or Garfield Smith, Red had been anxious for some time to get No. 6 properly positioned in the Garden skyline. He’d tried to no avail to induce a sooner return from his protégé.

Surely Russell knew his TV work would direct his steps to his old (though remodeled by then) stomping grounds – and it happened just a couple of weeks before Cowens (whom Russ had strongly endorsed to Red, BTW), Havlicek and Co. would return to the post-season for the first time since No. 6 had been utilized. 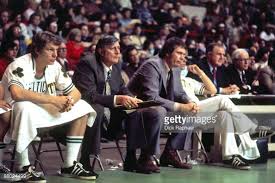 Back then, the network TV guys worked at mid-court directly across from the regular scorer’s table and benches. During an early stoppage in play of the Celtics’ and Knicks’ sixth and final confrontation of the regular season, our attention was directed above to the building’s reconfigured “trophy case.” (Mr. Brown’s “one” had been provided a separate banner with seven inviting vacancies.)

Naturally, the full house rose as one in warm applause.

But Bill never acknowledged the reception – hell, he never flinched. I had a clear view from about 20 rows behind, standing there as long or longer than anyone else. (I took my cue from Auerbach, who was about six rows down and in my peripheral vision.)

There are times when a packed arena “speaks” in unison – a long “Whoosh!” when a crucial bucket drops, the audible gasp that precedes the dead silence when a player goes down hard. About 30 seconds or so into this ovation, a novel sound seemed to arise – I think it was a group “Harumph!”

The clapping subsided, replaced by mumblings like “Well, if he won’t even …”

I’d already read Go Up for Glory and was aware of Bill’s strong beliefs, so even my 15-year-old incarnation wasn’t shocked – if anything, I admired his guts and conviction.

But I don’t believe I truly understood the motivation behind Russell’s “actions” that day until I re-read his retirement article in preparation for writing this piece. Bill summed up his decision to stop playing this way:

Russell had struck the same chord a mere eight months earlier upon being recognized as SI’s 1968 Sportsman of the Year. Again in his own words:

To be disingenuous, it seems, is simply not in the man’s character. 
On that same Sunday, John Havlicek led his team to a 112-109 victory with 41 points, in the process surpassing Bob Cousy as the leading scorer in the history of the Celtic franchise.

Also worthy of note in this context is that on the second Sunday of March in 1969 (the calendar date was the 9th), the C's honored the retiring Sam Jones at halftime of their game with the Warriors, hoisting No. 24 to the rafters in the process.