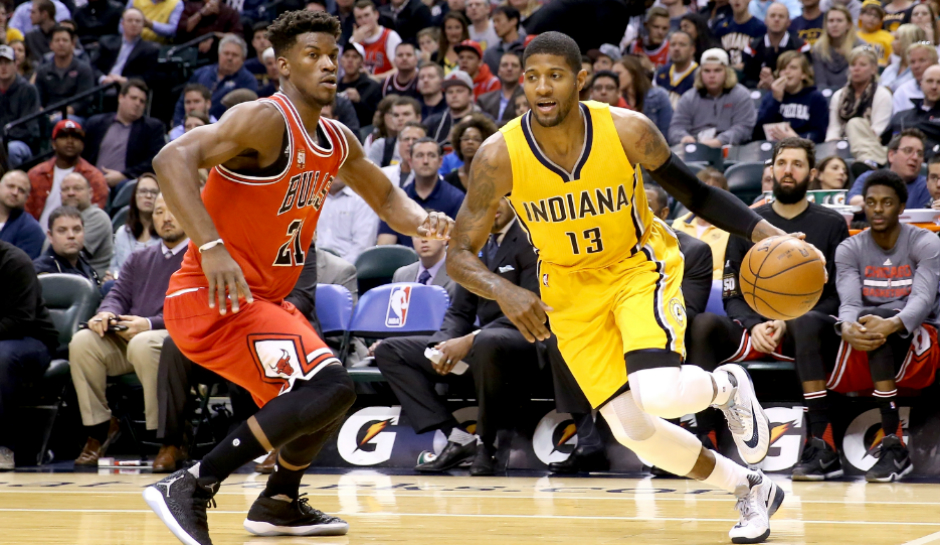 As the trade deadline nears and the talks actually start to heat up the Celtics are going to continue to be in the middle of the conversation for nearly every player that might be on the move. Just this week Adrian Wojnarowski of the The Vertical spoke on Carmelo Anthony, and Phil Jackson's desire to move him. Although the Celtics are on the short list of teams that Anthony has privately informed the Knicks he's interested in, according to Woj the Celtics have little-to-no interest in the 33-year old forward. Instead they are still focusing their efforts on prying either Paul George or Jimmy Butler of the Pacers and the Bulls. Wojnarowski via Yahoo! Sports:

Either player would be a huge addition to the Celtics but they would both likely require a hefty ransom. George seems like more of a long-shot; however, if Woj says there's been discussions then I wouldn't totally rule it out. He was unhappy with the Pacers' chemistry earlier this season, and with the emergence of Myles Turner his team might opt to build the team around him by getting a treasure trove of assets in return for George. The Pacers have turned their early season struggles around and are riding a hot-streak, they've won 7 of their last 8, but they've got some tough matchups looming between now and the February 23rd trade deadline including Golden State, San Antonio, Washington, and Cleveland. This upcoming stretch will be a great measuring stick to see where they're really at.

As for Butler, the Celtics and Bulls would be revisiting trade discussions that go back to last years draft where reportedly Danny Ainge turned down a deal that was on the table just before selecting Jaylen Brown with the 3rd pick in the draft. The Bulls, although still in the playoff race, are more likely to make a deal with their team just treading water at 26-27, and clearly they were interested in dealing with the C's last season so I imagine similiar talks could be revisited. Butler has been adamant that the Bulls should be adding at the deadline, even expressing interest in the Bulls snagging Melo from the Knicks. Although any deal for Anthony would require him to sign-off on his no-trade clause to join a team that's not quite in contention. Via Alec Brzezinski of Sporting News:

“That is half the battle,’’ Butler said, when discussing making a player from another team feel welcome. “And I could still do that. I think everybody knows what Carmelo can bring to a team. The dude is a helluva player."

Personally I'd love to see Melo to the Bulls, it'd be like throwing kerosine on a dumpster fire. Rondo, Wade, and Melo in the same locker room would be electric, but I'd rather see Butler in green. Both Butler and George are locked up for the next few years on very reasonable contracts and would give the C's the second scoring option they desperately need come playoff-time.

Ainge talked this morning on his weekly radio appearance on Toucher and Rich about how the Celtics are in discussions with several teams about a bunch of different players, and they'll weigh their options as we approach the deadline. He also noted that although players are being discussed, teams aren't quite showing their hands in terms of prices and just speaking of possible availability.

Smaller deals might come to fruition before the deadline, but don't expect any blockbusters until the February 23rd deadline as teams will hold out for the best offers they can get before moving a star. Ainge is holding some big chips with those Brooklyn picks and some good young players, but he could have a solid trade season by making just a smaller move for a paint presence/rebounder for the short term.