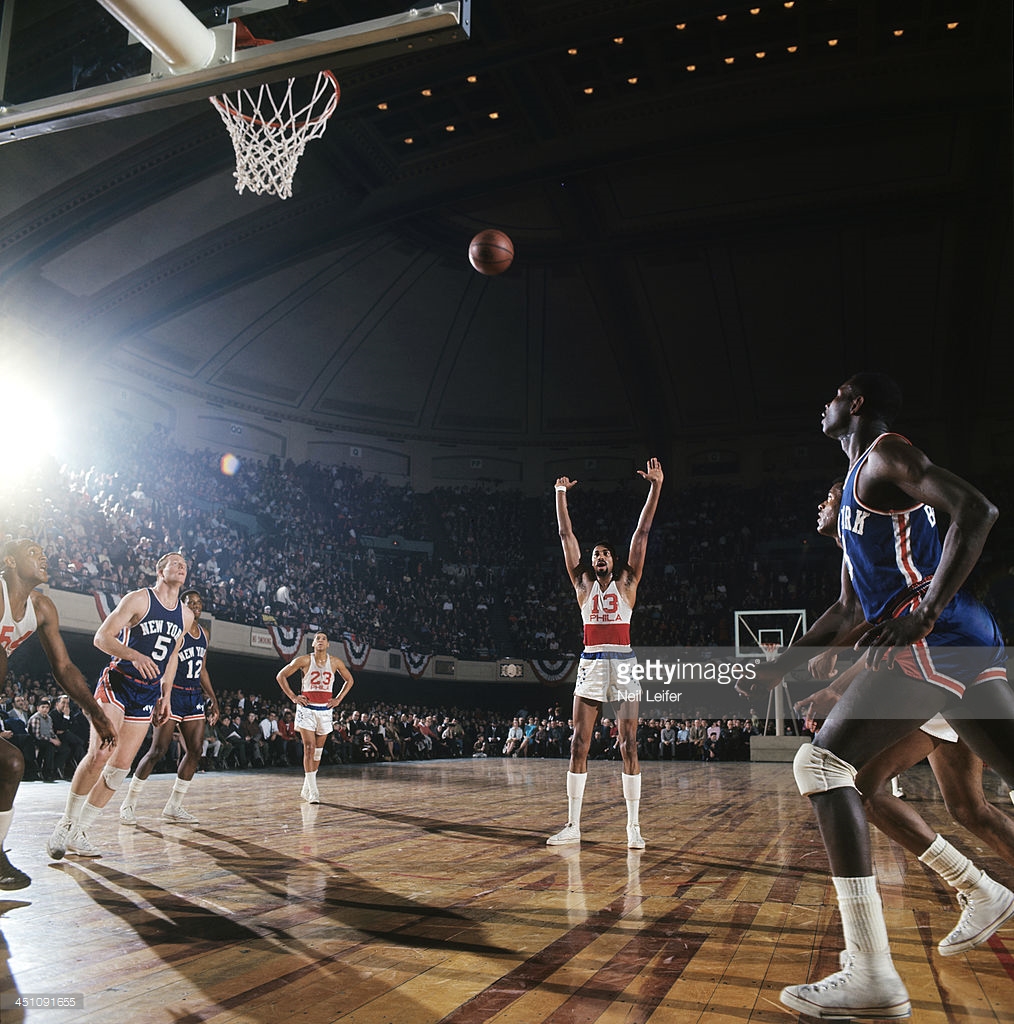 
Believe it or not, in the infancy of his basketball playing days, the last thing you wanted to do was put Wilt Chamberlain on the free-throw line. He wasn’t going to miss, and even if he did, you couldn’t stop him from getting his own rebound.

But before his career hit puberty, they went and added that little codicil to the rulebook whereby a free-throw shooter cannot cross the foul line until his shot “hits.” Wilt, a world-class long jumper, was ever after – well, except for that magical night in Hershey – a “most foul” foul shooter. 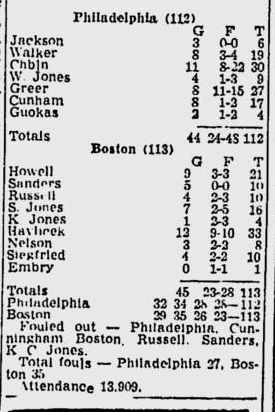 Chamberlain was a grown-ass man of 30 on the afternoon of Feb. 12, 1967 when that fatal flaw in his game was on display before a Boston sell-out crowd – 13,909, of course – and national TV audience. The Big Dipper attempted 22 freebies and missed 14 of them. (On the plus side, three Celtics, including Coach Russell, were disqualified for excessive fouls.) Some of the more flattering aspects of No. 13’s play were also in evidence that day: 30 points, 28 boards, a team-high six assists.

But the weary Sixers – playing their fifth game in six days with another on tap for Day Seven – couldn’t quite out-scramble Captain Havlicek and his mates. Philly had fallen to Gene Shue’s developing Bullets in Baltimore the night before, only the second (and final) time Coach Alex Hannum’s Elites would suffer consecutive defeats that season.

It was an irritable coach vowing to file an official protest of his team’s 113-112 loss who left the Garden floor that long ago Sunday. Over and above the alleged “official” blunder, Hannum had detected that his team’s play was slacking off. Wilt’s foul-shooting woes were becoming contagious –ever-reliable Hal Greer’s uncharacteristic five misses didn’t abet their Garden fortunes. 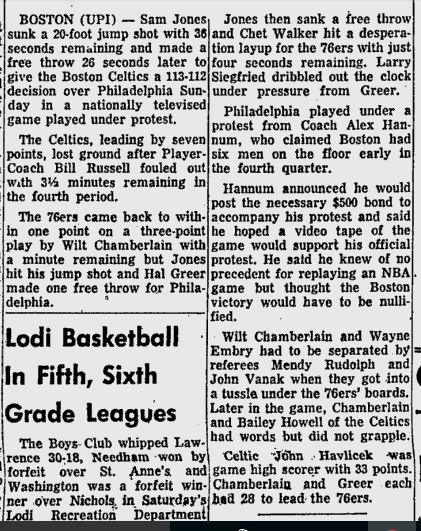 Of more concern to the wary coach was the defensive end of the court. Gus Johnson and the Bullets posted 139 points on Philly in Saturday’s upset victory after the 76ers had yielded 133 to the Lakers despite winning at home Friday. On consecutive days a week and a half earlier, Wilt and the boys had surrendered a combined 280 points to the Lakers and Warriors, both road losses. In the 143-133 loss to the Lakers on Feb. 1, Wilt tallied 39 points (despite missing 11 from the line) and “fouled out” both LA centers, All-Star Darrall Imhoff and newly-acquired ex-Celtic Mel Counts.

Philadelphia had given up more than 130 points but once (an overtime victory vs. New York) in their first 53 games.

In the Celtics’ 14 match-ups (including playoffs) with Hannum’s historic honchos, Boston cracked the 120-point plateau only in their 121-117 sweep-avoiding sole victory in the Eastern Division Final. 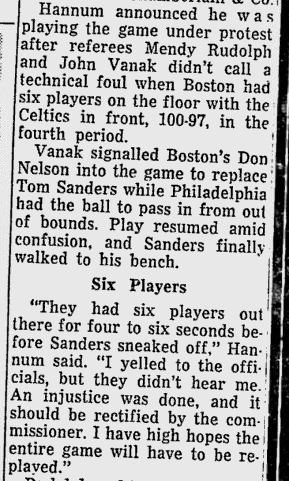 A 1966-67 NBA team’s average per-game performance featured 103 shots, 45 or 46 makes and 117 points. Nearly half of the successful FG’s were assisted, and a team would snatch 67 rebounds while committing 26 fouls each game.

Both teams snared 70 boards a game, trailing only Nate Thurmond and San Francisco.

A careful reader and meticulous minder of all matters Celtic will have already noticed that Red Auerbach’s 1964 First Round draft selection, who’d been dealt to Baltimore in September to acquire Bailey Howell, had found his way into a Lakers’ uniform in time to hack his way to a DQ battling Chamberlain on Feb. 1. 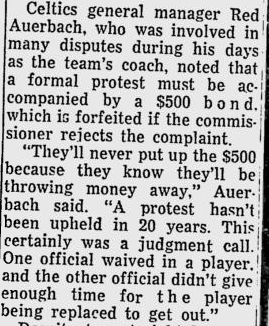 The seven-footer out of Oregon with the soft touch had experienced an interesting NBA “Journey,” Man, since exiting Boston. The third-year pro had played for as many coaches as he spent months employed in Maryland. Then a three-team deal that would send him closer to his West Coast roots was approved right around the All-Star Break in early January.

It seems that veteran Laker forward Rudy La Russo was balking at being sent to Detroit.

Balk, nothin’. The Brooklyn-born, Dartmouth-educated La Russo had transformed into a West Coast guy – he wasn’t budgin’ and did indeed wind up in San Francisco the next season.

Our budding journeyman’s journey – which would ultimately take him to a couple of franchises that didn’t even exist at this point – was stalled. (Not to mention that of a serviceable veteran big man originally from Philadelphia named Ray Scott. This “journeyman” would play his last season of pro ball for the ABA’s Virginia Squires alongside a rookie named Erving and that squad’s leading scorer, Celtic-to-be Charlie Scott.)

Commissioner J. Walter Kennedy pushed the deal through without too much delay, awarding LA’s first pick in the 1967 draft to the Pistons. 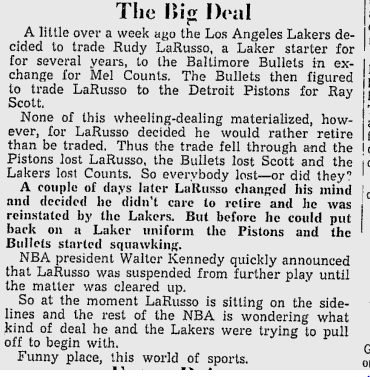 Thus was Mel Counts in place on the Los Angeles Lakers’ bench, available to substitute in for Chamberlain in the fourth quarter of the final game of Bill Russell’s illustrious career. (But that’s another tale for another time.)

Footnote:
Russell was so offended that he publicly disparaged Wilt for simply not putting himself back into that game … Bill’s blunt, bitter words sadly led to a 20-year rift between the two friends and rivals.

Last word:
The two times Mel “Journeyman” Counts was traded straight-up for another player … the “path” of that other player led him to Springfield. Just sayin'.


An index for “Sustained Excellence” is available here.